The Day and the Time 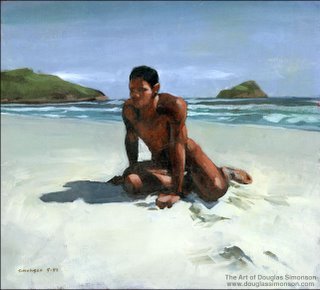 So I am taking yet another chance: I'm taking a leap in the dark and am going to start all over. It's my life up to this moment redoux. I think I owe it to myself, without explanations or too much double guessing.

Not that I have not done it before. Talking to Shelley and Sharon over dinner on Thursday I realized that I've been taking these leaps in the dark quite frequently: when I changed Universities in Colombia, leaving the safety net of my Alma Mater to go to a Catholic University to shake it up a little bit, when I took my TOEFL and scored top of the class on a dare that basically got me a ticket to the United States, when I bid au revoir to Ramirez, knowing very well that I was not going to return -leaving behind twelve years with him and the safety of a home- or when I decided to stay in a $30,000 a year university to pursue a degree after Terry left me stranded with $450 in my checking acoount. And I did not take his offer to buy me a ticket to go back.

Or when I met Rob by chance -and Mickey's insistence- in a bar in Pittsburgh when I had totally swore off any relationships. But I decided to give it a go, even when it was long distance and I had no idea of who he was. Or when I left Pittsburgh to come to a small city in Ohio to try my hand at living with someone who seemed the personification of Prince Charming to my weary eyes without anticipating the heartache and the tears. What would be the difference?

So I'm going to give it a try to make this complicated relationship work. You (who from this moment on are basically the purveyor of my catharsis) may wonder why I just won't leave him and move on, if thinks have come to a head and we seemed totally doomed as a couple? Well, because deep down I know he loves me. And I love him. We fulfill that tired old 'in our own way'cliché.

In our own very twisted ways we have been pushing for this relationship to work (I know he's been this close to giving up and heavens know I've been there, too) and we are both too stubborn and aware that there is NOT a spotless, bumpless, painless relationship out there for us (or anybody, for that matter). We know we are too set in our own ways to change at this point. He's controlling, I'm rebellious. He's compulsive, I'm a space cadet. He likes to look, I like to touch. He pecks, I French-kiss. So what?
I think I have to grow up a little bit more and stop the insanity: there is NO perfect man out there. The ones who had wanted me to the point of obsession have grossed me out at the end, the ones who had bended over backwards for me have bored me and the ones who had played hard to get have annoyed me to tears. So what if he's not perfect? No one is. My Bovarism should subside and my mind should take over my heart for a few heartbeats and I should act my age and not my shoe size.

So among the flurries of dinners, parties and cold nights these two weeks have brought and I know will bring, I should make also resolutions. Resolutions that should not stay here in cyberspace, though. I think this time I should stick with them for a change and not wait for destiny -karma, serendipity, whatever it is called- to decide for me, the same way it has been until now. I think taking the bull by the horns is the right thing to do. So I'll just follow the advice I've given to many confusion-stricken friends and will look for help. And I'll let a stranger into my head and will try to solve the puzzle my personality has become.

I think I'll try and open up a little bit more to myself and him. And maybe that way this crazy competition to see who gives up first ends. Maybe there is no way to fix this up and all I'll find out is that I can stay without a man for at least a few months or years or that I was meant to be a serial monogamist and I'll just move on to yet another relatioship and will be in it for four or six years until I have to do it all over again.

But who knows? My life has taken so many sudden twists and turns in the last ten years that I have no way to predict it. And why should I? My life has never been an easy one and I guess that's what has made it so worthy of being lived. I would have died of boredom if I were one of those people who are just 'there', not even counting the days. Joyfully oblivious of anything that happens outside of themselves, because nothing actually happens at all.

Maybe I was indeed meant to be Peter Pan's soulmate, without the gift of Tinkerbell and her magic dust to take me out of trouble when needed. And I would just hope for my own mental safety that I'm able to make the transition to being an 'older gay male' when the time comes and my waist expands and my hair goes gray. When I cannot any longer shock people telling them my age because time will make sure there are no questions to be asked and I'll catch up with myself.
But to start with my resolutions I would need to grow up in more sense than one. Hopefully, it won't be that difficult. After all, the clock keeps tic-tocking, giving me experience in dealing with myself and others and I don't feel I need a map every time I take a trip down the rabbit hole.