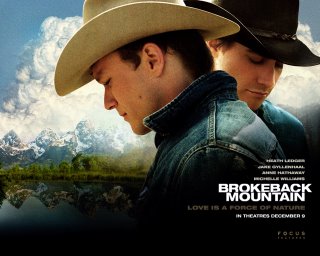 Well, I went to see Brokeback Mountain after all this wait. And it was worth it. I actually have to go see it twice. I don't think it's an easy movie to see. In the first view, the fact that I have read the short story by Proulx some time ago kind of didn't let me see the movie without using that as a backdrop. Still, putting a face on Ennis and Jack and seeing them come alive on the screen was incredible. In the second view, more things came up and also more questions. But that's what good cinema does: it makes us think.

The story is touching at so many levels that I would need much more space (and a real talent for writing) to make it justice. Let's just say that if you have found yourself in the throes of being in love or being in love with love, you need to go see it, too. I think it transcends the fact that the leads are two men and goes beyond that: it's about the choices we make, the fact that we are constrained by socially constructed rules and that masculinity needs to be re-defined.

In this story the choices the main characters make at the beginning of their relationship define and delimit their interactions. Their love affair, that spans twenty years (much more than most marriages I know) is one full of the longing of one of the partners and the closing of the other. Jack wants a life together, Ennis cannot but think of the man he saw killed by the mere fact of being suspect of being a homosexual and that does not let him even consider Jack's proposal. And the anguish, desire and love this interaction creates is set against the backdrop of the -less than loving- sixties, seventies and eighties in littletown, USA.

The fact that society creates and defines the rules by which we interact, the fact that they are two men constrains and dooms the relationship. In small communities the fear and disgust 'otherness' -be it sexual or racial- causes, does not let their story unfol the way it would have if they had had their encounter in other setting. But then the splendid backdrop of the mountains, rivers and open prairies that we see in the movie would not contrast so painfully with the bounds society imposes on these two men in their pedestrian, everyday life.

And their roles as men derive from the narrow definition society imposes on communities: you are stoic, you marry, you have children, you raise them. If you divorce, you pay alimony. And then you re-marry and perpetuate the cycle. Love is not part of the equation. Only survival of the status quo. The movie is reactionary in which subverts the paradigm of masculinity. These are not two interior decorators from San Francisco, these are a ranch hand and a rodeo cowboy from the Midwest. And that should rub a lot of people the wrong way. The fact that they show tenderness, commitment and desire towards each other -something they do not show to their wives- is also something that goes against all that the narrow definition of love, sex and masculinity many people have.

Their struggles made me feel fortunate. Fortunate to be able to speak the name of the love that in their case dares not speak its name. Fortunate to have a man who loves me and protects me. A man who pushes all the -right and wrong- buttons I have and that makes me question life and my own decisions and opinions. And what if I (and I guess he) have to take the occassional trip to Mexico, just like Jack did? I imagine at this time and day it does not mean we love each other less.

All in all, I have to recognize that I'm fortunate: I love and am loved and I don't need to go anyplace far from civilzation to share and show that love. I cannot marry him -I don't think I'd do it, anyway- and I cannot yet kiss him in the middle of the Mall, but I can live with him and share my life with him almost openly without fearing that I -or him- would be lynched just for living together. My relationship is not perfect, but who cares? And who's got a perfect relationship anyway? But of course, this is Ohio, so one never knows.

There's still a lot that has to be worked in this country before acceptance of 'otherness' is common and maybe there'll never be any kind of concession from the oppressive religious right. But there's hope and if not in my lifetime, maybe in someone else's grabbing another man's hand will not be seen as a moralistic red button but just as an expression of love.

One can only hope.