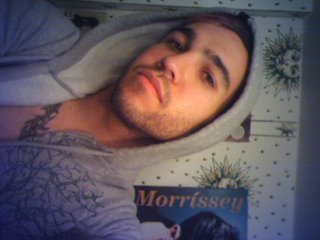 While reading the posts in one of those fan sites I found a link to pictures of the bassist of Fall out boy. The boy is actually cute. Stands out in that band. And apparently he was playing with his junk and took pictures of it. Now they are all over the 'net.
I have to admit that I find him handsome. In a puppy-man-boy kind of way. And the pics are hot (in that gritty way amateur nude pictures are hot, like they hit you in the gut, with all the desire and intention the person who posed projects in them). And I like looking at pictures of naked men. VERY much. Apparently many people -I think straight- did not like what they saw. That if the tatoo this, that if the wallpaper that, that he's fugly (love that word) , that his Fruit of the Looms are not hot, blah, blah, blah.
What is up with these people? They purposely log on a website to look at a guy's thingy and then post that they not like it (some even said it was too small. It looked just right to me. I'd have a ball) and then proceed to tear him apart. Silly people. Probably with body issues. Whatever.
I think he's corageous. I wish I'd feel the same way about my body (and my junk) and had the balls (no pun intended) to take naked pictures of myself. Or let someone take them. Soon it'll be way too late. Age -and gravity, carbs and too many Hershey's Kisses- do not forgive. I do remember, however that once Terry -my ex- took some buff pictures of me and I totally freaked out. He used the first digital camera he gave me and he tried it on me coming out of the bathroom. Bad move. I had him delete them and sulked for half an hour.
I know he kind of kept up with his hobby. Months after we broke up he was apparently sending candid pics of his pickups to some of my friends (don't ask, I have no idea what that was about -maybe overcompensation-? dunno). And apparently he showed off his newly -eighty-pound-lighter- body in the buff, too. Some of my friends gladly forwarded those pics to me, too. It was weird looking at that body that was familiar for so long in such a way. But at least he was uninhibited -too much, sometimes, if you ask- something that I guess attracted me at the beginning.
It's that kind of raw sexuality, that 'I'll-do-you-here-if-I-can' allure that I find somehow irresisstible what I saw in the Fall-out-boy pictures. And I guess I like that. I kind of sensed that same urge in you. I guess it's all those hormones raging around your body and the pheromones doing their dance. I totally understand why some older -and that for you would be anyone over 25, I guess- feel attracted to younger men. It's that unabashed desire to get down and dirty without thinking it twice. The pleasure principle. A walking id. I feel envious.
But back to the pretty dirty pictures. I did another search -blessed be google- and found some very interesting websites. Spent some time looking at very er... uninhibited men. Very alluring. I think I'm beginning to appreciate porn more. I guess it'll take a more prominent role in my life as I decide to stay in this relationship. Little by little, I feel more like a loving roommate than a lover rooming with his mate. It is not good for your self-image, feeling like a pretty but not very useful thing. I feel sexy not very often. It's weird what your man's perception -or your peception of how he perceives you- does to you.
So, kudos to the Boy Who Fell Out Of His Pants. Sometimes I miss that passion. Or do I?
Cheers, baby boy.
Email Post