The harder the candy.... 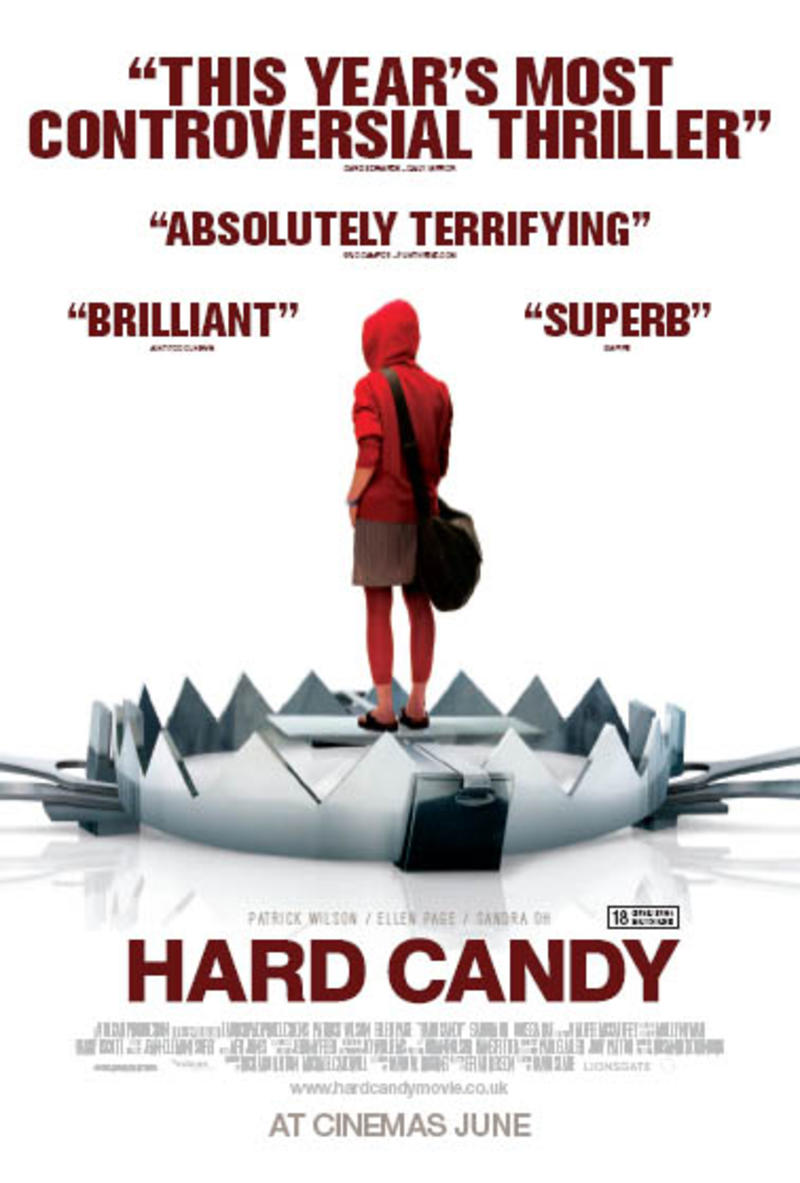 I know. It's just that I just don't have time to write here. Funny, isn't it? How before I managed to write something every other day and now it's most like every other week. But maybe during the Summer I'll be able to come here more often and will read you more often, too. Boy scout's honor. And talking about PYTs, it was good to see you. Seriously.

Maybe you are right. We do have to reconnect. I'll start by telling you about this movie I saw yesterday. It's called Hard Candy. It's about this young thing who gets involved with a much older guy over the 'net and they meet in a coffehouse. And he dazzles her. And she makes his mouth water. The older, sophisticated guy who just knows what to say and how to say it and the younger, eager quasi-pupil who cannot take her eyes off the handsome quasi-stranger that seems to be back from everything and at the same time fresh and understanding.
Sounds familiar? It did to me, too.

Until she suddenly turns the tables and becomes all business. I won't spoil the movie for you. Only thing I'll tell you is that the guy was yummy and I would have not considered him a dirty old man. Not even when I was fourteen. After all, I had my first man when I was thirteen. And I didn't consider for even a second dialing 911. On the contrary, I couldn't wait for him to come back for more. I actually encouraged him. Several times.

When I was younger, I only dated older guys. Ten, twenty years my seniors. History repeating, you'd say. But I know my fifteen-year-old-self could totally talk to a thirty-year-old American male. Or South American, for that matter. At that ripe age, I had already read and experienced many things that are verboten to your typical teen -in most parts of the world- not to mention here, where everybody seems so quaint, innocent, gullible.

So the image of the older guy -hot, hot, older guy in this movie, but of course that would be arguable for you- being surprised by his younger counterpart when the hunter becomes hunted and the seducer is seduced was actually quite interesting. But I also think that those perceptions affect the way we see things and people. There's always that thought in the back of your mind that maybe you can go that far, that you can only do that much, that it's only half-right for you to feel the way you feel. That may have affected me. Us. Looking back, I think it did.

I never pushed or went too far. There was that intangible line that I did not cross, even when I had the chance. Very Clintonesque. Very boring. Very wussy. But I guess deep down I wanted to, and that crippled me too. Nothing like being torn, huh?
And all this comes when I've been trying to find my old self again. I have discovered that I have repressed myself in many significan ways: I have repressed that me that surfaced for those few weeks last year, that me that was guileless, eager, free and very willing to engage with other people at many levels. With these sessions with the counselor, I've discovered I have recoiled in myself, I have been dormant by choice, I have turned around on my fifteen-year-old self. Why? you may ask? Conservation. Cowardice? Or more like self-preservation?

I think a little bit of everything. You see, I overwhelmed him with my self. That made him recoil in self-defense. That endangered a relationship I had fought to keep. So I took that edge out, that possible sore topic, that part of me that was so tied to my self that I was left almost empty. And I have not been able to find it again. Only sporadically. Only on my own. Or in binary codes, like here.

I have been left half-feeling, half-daring, half-willing. Will I recover? I have no idea. Hopefully, some of it will come back. That daring, willing, feeling self may be just around the corner or under the sheets. Hopefully, it'll come back soon. Otherwise I'm as doomed by his own desires as the guy in the movie.

So go see the movie and let me know what you think. And bring your pals. You may have fun. And that's good enough for now. Catch you around, babyboy.
Email Post