From the frying pan... 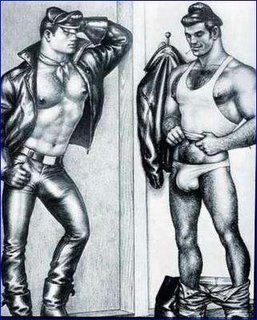 Oh, sure. It's not right. But it's ok. The trap of the straight-acting-gay-guy, the straight guy who can be 'bent' after a six-pack and a smoke, and the alluring rough-trade piece of cock are only variations of the twink, the sensitive, angsty,artistic guy, the abs-obsessed gym-bunny ideals gay men have created. Have had them all. Some, very intoxicating, some very toxic. But still, not real.
We created those icons, we perpetuate the stereotype.

When you say 'straight' guys all I can think is 'emotionally unavailable', 'uncommiting', 'untrustworthy', 'volatile' and 'bad for your feelings'. All you see is the engorged dick and the unavailable ass, I guess, along with some Freudian slips I won't even mention.

The lure of the straight guy is as real as the models of Tom of Finland. I think I'd stick with Ferdinand the Bull. I like my men gay. Totally gay. I don't like men with areas that are 'untouchable', who just lay down and let you do 'all the work', who cannot remember your name and whose first words are 'dude was I wasted/stoned/fucked up last night...' and who leave you empty and wondering about yourself for days. We gay men tend to be fucked up (by society, upbringing, internalized homophobia, you name it) but we make it worse by imposing on ourselves impossible to attain goals that usually have to do with our shortcomings. And that's an uphill battle. We're doomed to lose.

Most of the best lovers I've had have been gay men who have conquered their gohsts, fought their fears and found their inner Ferdinand. They have found out that the fact that they are gay does not make them less of a man. They relish in their masculinity and on their 'feminine' traits and accept them in other men who love men. A man can be sensitive, know the principles of grooming, carry out a conversation without mentioning NASCAR and without spitting tobacco and still be manly. Extremes are noxious, and when you go either for the vacuous queen or the woody Marlboro man you're dooming your chances of actually connecting to other guy. Middle ground is the ideal, but we're too hung up on our own fantasies to figure where that middle ground is located.

And now I better go back to bed. This insommia is getting the best of me.
Cheers, babyboy.
Email Post