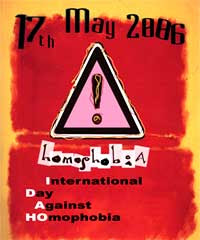 No, not the state. But it IS a state. It's a constant fight. Fight against homophobia. And like Mother's day it's today and every day.
Read this, please:

What are the practical objectives of this Day?

In practice, our first objective is to provoke action. Actions could take on a number of different forms : a debate in the classroom, an exhibition in a cafe, a demonstration in the street, a radio program, a screening in a neighbourhood home, a round table organized by a political party, a short story competition sponsored by a newspaper, an awareness campaign led by an association, etc. These initiatives could be backed by LGBT (Lesbian, Gay, Bi, Trans) associations, by human rights organizations, but also by women and men of any background and interest. In fact, today many people who are not specifically interested in questions of homosexuality are worried about the problem of homophobia.

The second goal of this Day is to coordinate and increase the visibility of our efforts. If all our efforts happen the same day, they will be all the more visible and efficient. And if the day becomes an annual meeting, the media and public opinion will be all the more attentive to the questions brought up, as well as to ground gained or lost. Moreover, those who coordinate this Day could report back the results of the efforts, informing journalists and favoring exchanges of successful actions among the local organizers.

This project has a third objective: to place this Day on the national calendar in a maximum number of countries, and then, why not, to have it adopted on an international level. Obviously, this is a long term objective, if not an ideal. But official recognition is not just a symbol, since even symbols have real power, as we all know. Recognition will contribute to the persistence of the fight. It will also make it possible to show that the fight against homophobia is not only the business of gay, bi or trans people, but that it is the full responsibility of public authorities and the will of the whole of society.