Hell IS other people... 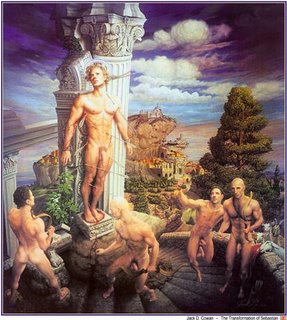 Remember when you told me that I had my underwear in a bunch about the religiuos 'reich' and that you thought it was 'not that bad'? Well, I got news of a wonderful new video game that's making the rounds with the nerds all over the USA: The Purpose Driven Life.

In this game, the zealots have a chance to mold the minds of impressionable thirteen year olds. And they keep saying that WE recruit! The nerve! Just take a look at their own press release:

Imagine: you are a foot soldier in a paramilitary group whose purpose is to remake America as a Christian theocracy, and establish its worldly vision of the dominion of Christ over all aspects of life. You are issued high-tech military weaponry, and instructed to engage the infidel on the streets of New York City. You are on a mission - both a religious mission and a military mission -- to convert or kill Catholics, Jews, Muslims, Buddhists, gays, and anyone who advocates the separation of church and state - especially moderate, mainstream Christians. Your mission is "to conduct physical and spiritual warfare"; all who resist must be taken out with extreme prejudice. You have never felt so powerful, so driven by a purpose: you are 13 years old. You are playing a real-time strategy video game whose creators are linked to the empire of mega-church pastor Rick Warren, best selling author of The Purpose Driven Life.

Ok, now tell me I'm dellusional and that everything is a left-wing, liberal conspiracy. I think these people are nuts! The muscular Christianity of Narnia is coming to the closest dorm room in no time. I'll start taking shooting lessons. No way I'll let a pussy Christian boy -or girl, mind you- with no life and no brains decide that I'm the best next target and shoot my ass just like he/she did while playing with his/her joystick.

It's sick. It's depressing and it has to wake some people up. So go ahead. Call me delusional again. I'll be in the next shooting range. Packing iron.