In the name of the father... 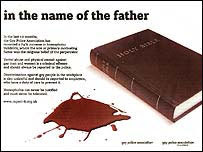 Christian morons are up in arms in the UK because an ad with a spat of blood next to a bible appeared in a newspaper. It's a 'faith crime' now. Idiots. Nothing like homophobe, ignorant bible thumpers to try and spin anything with their rhethoric. An eye for an eye, says in the bible, doesn't it?

What the advert actually said is:

In the last 12 months, the Gay Police Association has recorded a 74% increase in homophobic incidents, where the sole or primary motivating factor was the religious belief of the perpetrator.

Verbal abuse and physical assault against gay men and women is a criminal offence and should always be reported to the police.

Discrimination against gay people in the workplace is also unlawful and should be reported to employers, who have a duty of care to prevent it.

Homophobia can never be justified and must never be tolerated.