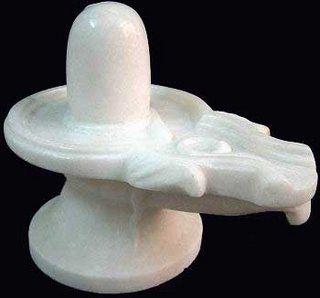 Oh, well. I have to say my life's always been this way, so what's new? Most of my life I've found myself in a succession of coincidences that seem just too cool (coming to live here was one of many). But let me tell you about the one that's making me write: in one of my first visits to Cleveland, I went to the museum (I've told you I'm a closet geek, haven't I?) and one of the pictures I took that day (in the down low, because they do not let you use your flash in the rooms) was of Shiva, the Indian God. I took several, of several artifacts that called my attention, but this one ended up in a frame, in my personal space at home. I just thought it was incredibly cool and I kept looking at it. It's been with me ever since. And so started my imbroglio with him. After that, one day in class I mentioned to my students that I've been reading on him and Indian religion and a student offered to give me a figure of him. I was thrilled. And accepted the figurine.

To this day, I still have the picture and the figurine in my 'room' downstairs. They are part of my 'stuff'. I burn incense for him and we have 'conversations'. I do not see faith as biblethumpers see it: for me, it's business between God and myself. No intermediaries or guidebooks. Simple dialogue between me and that high presence. Whenever I have a problem/question or simply want to talk, I talk to Shiva. I use the figure to have something to direct my thoughts/words to, but it does not mean that I am praying TO the figure (so I cannot be accused of idolatry, even though that would be cool, but I digress). And so far it's worked. I come from a tradition of saints, so starting a dialogue with an image not that 'foreign' to me (my granny had the coolest altar when I was growing up and to this day I remember it with fondness). It's cool and it centers me.

Besides, Shiva is a very cool diety (if dieties can be cool, he totally is). You see, in Hindu religions, there are several manifestations of the same God/Goddess and they do not have the one-dimentional, all-encompassing, quasi-dull nature of the other manifestations of 'God' we have in the Judeo-Christian and Muslim religions. Shiva is man and woman, creator and destroyer, fire and water. That's a plus to begin with. Besides, the whole cosmology is closer to the pantheon, and Greek and Roman versions of gods than to the old testament version. Much more colorful, explaining creation and life in a much more 'natural' and creative ways. Religion and physics. When fairy tale -unbounded by time- and life -with its cyclical rhythm of creation and destruction- merge and explode.

Not that Hindu religions would not have their rabid extremists. I suppose you have nutcases everywhere. And they should have their particular prohibitions against same-sex love, something that in my book is just really bad. But at this moment they are so detached from my reality that I would not even care too much about it at this point. I just pick and take what I like most of a set of beliefs and adapt it to my life (this is what religion should be for people: you pick and choose whatever you like of it in order to keep your head together and make the world a better place), selective? Yes. Idiotic and dogmatic? Nope. So that's my take on Shiva.

And recently, I've been talking with this guy. He's just 'another guy'. Or maybe not. He seems to be, well, quite innocent. In a very cool, pure kind of way. You see, I am pretty sure he's straight, but still very candid and very open. The fact that he appears to be so chummy may be cultural and his being used to being with other men most of the time, but I don't think he can read my interest and gestures as a sign of me liking him (and I think I actually do). In Indian culture guys hang out together and hug and hold hands without it having a sexual connotation. Leave it to me to take advantage of that. Not that I have hugged him or held his hand. But I have to confess I have felt and feel very tempted to do it. But on to the coincidence: part of his name is related to Shiva. Who would have thought?

Not that it should be all that rare. After all, Indian culture is very patriarchal and Shiva being a symbol of the masculine (oh, yeah, THAT symbol) it is not rare to find the god being part of a male name. Shiva is represented in several forms, one being a man and a woman at the same time. As parts of a whole -I wonder if that's why my new friend does not seem to get the 'vibes', accustomed as he should be to see everything as part of a dychotomy- but Shiva is also worshipped in a non-human form: it is seen as a big masculine symbol from which life flows (and a river that symbolizes life, etc). Been seen as the source of everything that is masculine and bound to creation, it is then worshiped by both men and women. Some people say that he who desires perfection of the sould should worship the lingam. Check this out: "The term Lingam, in Sanskrit, means ‘sign’. Shiva, as the Absolute - that which is unmanifest, can only be perceived by the means of his creation - the source of life from which the world is issued. This is the principle upon which the veneration of the phallus is based in Shaivite mysticism." Sounds good to me. My veneration for the masculine and its representations is absolute.

So my new friend, apart from being Indian, being familiar with Shiva and sharing his name, is also very, very nice to me. He seems genuinely interested in the whole intra-cultural exchange and very comfortable when he's with me.I don't think I should read much into his level of comfort, so I think I'll just enjoy this as it comes. I've been tempted to ask him out for a cup of coffee or lunch but I think I'll wait. After all, serendipity works alone, without apparent human intervention. Who knows that Shiva may have in store for me. Meanwhile, I'll keep enjoying this new kind of friendship. Tinted -but not tainted- with some kind of not-too-veiled attraction. I have to confess that I really like how he looks and smells and feels to the touch, but I also like the way he sees the world, this new and earthy vision of the same old place I very seldom look at with wonder these days. Sounds like fun, don't you think? Or like danger, which may mean the same at a certain point.

Part of my cosmology and culture is taking one day at a time. And I'm planning on following my gut here. Whatever will be will be. Why worry too much?