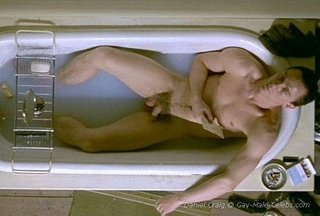 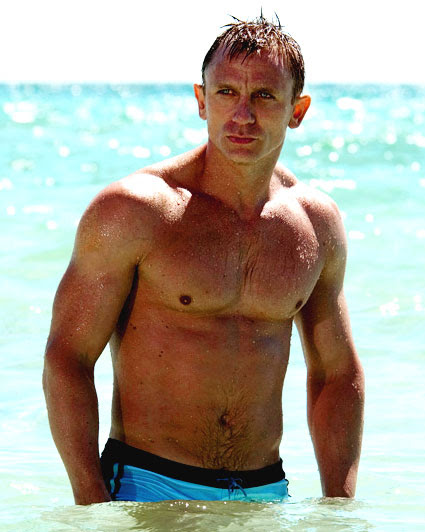 It was good to see you, babyboy. Cool that we share the same taste in clothes. Hope to see you again soon, preferably wearing that jacket. And talking about jackets, I just saw Daniel Craig in the new Bond flick and that man has redefined for me the term 'wearing well' anything.
Not only is he totally delicious (no boy in that man) but he's incredibly sexy. I had to actually stop myself from sighing loudly when he comes out of the sea wearing nothing but swimming trunks. REAL swimming trunks, mind you, not the quasi-pajamas the ever-so-prude-and-prudish American men wear to swim. This man has got legs. This man has got a chest. This man has got the most beautiful blue eyes ever and a swagger that just don't quit. And watching him walk TOWARDS you in a take from his thighs up reminds you what a man walks like.
It actually reminded me of the first time I saw a Bond movie. It was way back, when Sean Connery ruled the vodka martini. I felt the same stirring, the same giddiness, the same feeling of blushing inside, of recognizing that I really like men and why. Mr. Craig is going to be an awesome Bond. Not only because he's totally a feast for the eyes but because he comes across as a man. Not the distant and somehow cold I'll-fuck-them-all-righ-now Bond of yesteryear but like the even yummier and sexier come-hither-I'll-do-you-like-nobody-else man Mr. Craig has inbued in the franchise. Oh, nothing like being a spoiled fourteen year old again. All hormones and sticky hands. I smell sex and candy.
Cheers, babyboy.
Email Post