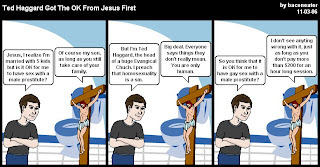 Ted Haggard, last seen denying he liked call boy's cock, is now straight. Yep, cured. Quickly, isn't it? I thought the 'experts' have predicted it would take some years for him to be at the 'straight' stage and politely refused to 'treat' him. But now he's all man. You see, when there is so much money involved, christian cocksuckers get over their crave very quickly and begin thinking how they're going to keep getting money from idiot wingnut morons who want to save their asses after they have given them up. To other men.
Now he's off to an online degree in psychology (riiiight....) and probably off to make thousands talking to the ex-gays. Do this people actually have a sense of shame? I think not. All they can think about is money and power and hopefully that'll keep Teddy from cock from now on. With the world watching his every step, he better not get on his knees or on all four any time soon because then he'll be royally fucked (no pun intended for real).
Email Post