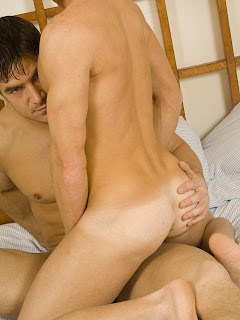 Funny, how when reading stories invented or half-lived by others your own story becomes less of a reality. Or more of a story itself. I have been reading short stories written by all kinds of men. older, younger, American, British, in love, in lust, alone, in couples... all of them sharing love for other men. And I began to realize that one of the people that keep coming up, conjured by the words and sentences written by these authors is N. Or should I call him F? I guess N was my name for him, so N will be.
We met in the most uncommon circumstances: I was fucking someone (married, but then so was I) and N showed up one day at his house when I was there. I thought -very kinky of me- that we were sharing that cock and we could share ours too. An invitation to a movie developed into one -if not the best- of my relationships.
It was not only the sex -hot, forceful,sweet and exhausting- that we had. It was more of a connection that I have seldom felt with other men. We shared many things: the skin hue, the same major, the same twisted sense of humor, the same kind of past, the desire to be ourselves, the slight comptempt we felt for society. So many things.
He got his first apartment under my pressure. I have to accept I was jealous of the guy in whose house he rented a room. That should have been an alarm bell going on my head. My being possessive could only mean that he was important for me. And he would become indeed one of the most important people in my life. I made him move out and set house with one of his best buddies, who patiently had to listen to our lovemaking through the not-too-thick walls in their little place.
N eventually moved to another apartment, And yet to another. And we were still together. He was having a relationship with me, who was in a relationship at the same time with another man. Oh it was twisted and very few people knew -or understood- but we lived almost-together for almost four years. Or a little more. N was basically my lover, J was my brother. J is a man who was more family than lover, a man which I eventually left but who is still my family.
Most of my closest friends knew what N was for me. He was my sun. He was my earth. He was so many things that it seemed impossible that it was gonna end. But it did. By my own doing.
I decided to accept an offer to study away from N. Away from J. Away from everything I knew and loved. And so it all ended. It did not die a quick death, mind you. It took me a year of pleading with N to convince him to join me. Then he said he would not do it. And I was mad. So I ended it. Only to discover that a year later, he would come and live in the same city. Ironic, in a very un-Alanis way. And now we are 'friends'. We talk on the phone, we email each other, we are even planning on writing something together for a journal. He's got a man, I've got my own. He's working on finishing his degree and then I don't know what he'll do. Haven't talked to him in weeks.
But whenever I read any of these stories, with their rich relationships, with those descriptions of love and sex and life, I can only think of N. He's my story, he's the man I have loved most, I guess. I sometimes think he was the love of my life and that I fucked that up.
But there's no sense in crying over milk that has been spilled. One has to do with what one has, hasn't one? It's the grown-up thing to do. You make your bed, you sleep in it.
Still, there's the bittersweet consolation price of stories told by other men about some men in love that brings back memories. Memories that are warm and hot and sweet and old. But those memories help me realize that I have lived. And that I have lived to tell. Which is no small feat in these times.
Email Post