On being a man 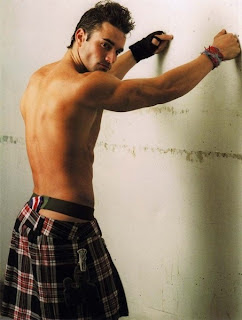 Masculinity, that elusive quality that gay men seem to crave (we have all come across that 'straight-acting/looking requirement in a high percentage of online profiles, haven't we?) has come to the forefront now again thanks (or unfortunately due to) the shootings in VT.

The perpetrators of random school shootings since 1982, all boys, were "overconformists" to the popular notion that being a "real man" means aggressively defending your manhood when it is challenged, such as through prolonged bullying, said Michael Kimmel, a sociology professor at the State University of New York at Stony Brook.

And no weapon is more emasculating, or brandished more frequently on schoolyards across the country, than the homophobic rhetoric used to describe anything that makes a young man different from his male peers, Kimmel wrote in a June 2003 article for the journal American Behavioral Scientist.

"We found a striking pattern [while analyzing news] stories about the boys who committed the violence: nearly all had stories of being constantly bullied, beat up, and 'gay-baited,'" Kimmel wrote.

Instead of the standard review of "what went wrong" with individual school shooters, the media, government researchers and society at-large must understand the roles standards of masculinity play in facilitating violent outbreaks by young men, Kimmel said in an interview for this article.

We, as taunted sissies or as closeted jocks, have all been through situations where our or someone else's masculinity has been ridiculed, doubted or smeared. It is a good moment to stop and think about what WE consider to be 'masculine' and redefine it if needed.
Masculinity, like any other social construct, could be challenged and changed. Not a bad time to start redefining what being 'masculine' is and get away from what the image queer press and media tries to imbue in us by shoving images of the 'ideal man' down our throats. That is fascism and it's got to go. Go ahead, start with the man in the mirror, buddy. It's about time.
Email Post