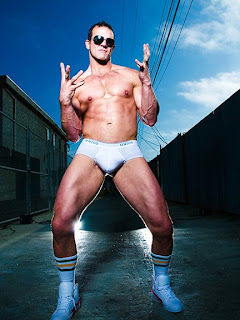 Funny, how not having a 'type' can also be a problem. You see, up until now I thought I did not have a special type of guy I liked. I've dated (and bedded) many 'types', from the young and restless (hi, babyboy) to the older and seasoned. From the slim and fit to the big and beautiful. And most any combination in between. But I have discovered -lately- that I prefer men that are well, less 'perfect'. I like basically men who can -and will- sweat all over you while they fuck you, men who are not afraid of getting a little bit messy and don't run to the bathroom to 'clean up' and would rather hug you, all the stickiness notwithstanding, to later to go take a shower with you and possibly, give it to you there again.
That man is also not physically perfect, either. He may have been muscular when younger but may have started to go a little soft now. Or he may be a few pounds over that 30-inch-waist that most models seem to have in OUT magazine. As long as he (and I) can reach his dick without problem, I don't give a flying fuck about weight. If he's slim, no problem, either. Slim is hot, too.
But the most important is that he be into sex. So many people I've encountered lately have such severe problems with sex it's ridiculous. It's either that they cannot separate it from affection (you either fuck or cuddle, not fuck AND cuddle) or they just don't seem to be able to 'get into it' and give off that preternatural fly-on-the-wall, out-of-body vibe that is a total buzkill (I want the guy fucking me to be there, body and soul, dammit!)
I think all I need is a guy who is a slut in the sack and a gentleman in the living room, one that can fuck me in the kitchen and still help with the laundry. I don't care much about the whole physical part as long as he is not fucking up my back with a huge beer belly or unable to fuck me missionary because I feel like a pile driver is crushing me (that's the best way to make me come like there's no tomorrow: on my back, kissing me while going at it). I think it has to do with demeanor and confidence. Think Daniel Craig in Casino Royale. Or the uber-delectable Mr. Ian Roberts, pictured above. Now we're talking.
In any case, I'm going to start my own little campaign to get to that guy I know is hidden beneath the layers of culture, hangups, emotional baggage, bullshit and shyness. Hopefully, I'll be back with a good outcome. Wish me luck, will you?