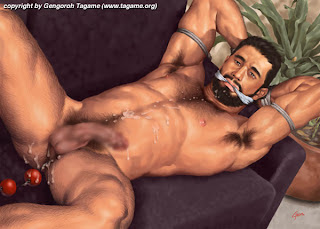 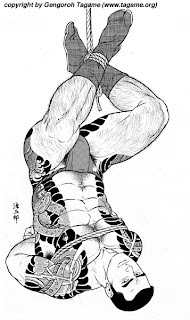 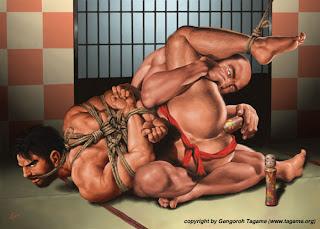 Given as I am to free association by the sake of it, yesterday I found myself going from watching the video from Madonna's Human Nature song to thinking about a guy I dated for awhile and who introduced me to the joys of what I call soft bondage. In the video Madonna plays with ropes, wears the classic dominatrix latex bodysuit and prances around with men and women in black, refusing to be put in a box and asking everybody kinky to just join her in her own. And so my mind wandered to a few years back, when I was single and somehow available.
Let's call him Floyd. I had known him for awhile and we had flirted with each other as a game for months before anything actually 'happened'. He made me laugh and I made him blush. I had always found him attractive: he's the kind of husky, long-haired handsome man I usually find really interesting. He's smart, too. Could talk about most any topic, worked with a research company and could do numbers like no one else I knew. So that added to the allure. He's got long, past his shoulders blond hair and piercing blue eyes in a classically handsome face. You see, I've always found fair-skinned men attractive. Contrary to many of my friends, who find them totally unappealing. But there's a foot for every shoe, no?
Well, Floyd and I evolved from the usual hand-holding in a restaurant to the forced dance in a club(I wanted to dance, he refused, so I basically gave him a mini-lap-dance) to the big make-out session (I'm BIG for kissing, you kiss me good and I'm ready for you) to the actual proverbial roll in the hay.
It was not hay, though, where we rolled. It was my apartment and my bed and me losing my soft bondage cherry to him. Everything started pretty hot but pretty conventional: him discovering I have very sensitive nipples and me discovering a beautiful dick (not too big, not too small) and amazing body hair. When I saw this big guy, his dick hard, his hair loose his breath abated on top of me, I almost lost it there and then.
But he had a surprise for me: he asked me if I had any handkerchiefs. I could not think straight then to save my life, but I managed to get some old bandanas out of some drawer. Then he asked me if I trusted him. I said yes (I was naked in my bed with this guy. Of course I trusted him!) and he told me that if at any moment I felt uncomfortable I should just say 'no more' and he'd stop whatever it was he was doing. I agreed.
Then he tied up my hands loosely with the first bandana. Then he tied the bandana to the bed. It was not too tight. It was more symbolical than practical, his tying me up. Then he asked me if he could blindfold me with the other one. I looked into his blue eyes and said yes. He blindfolded me.
Then I was all sensations: my bed felt soft and comforting under me but my body felt weightless and foreign. I could still feel him on top of me, between my legs, his lips looking for my nipples and his hand on my cock. I could feel how his breath got a little bit more laborious and wanted to touch him. I discovered that I did not want to take my hands out of the loop he had created with the bandana. I discovered that I was going by memory, remembering his lips that were now around my cock, his fingers, now getting me ready for him and his long hair, that I could feel sporadically softly touching different parts of my body as he hovered over me, tasting me, teasing me, getting me so hot that after awhile I started asking me to fuck me.
And fuck me he did. He got back between my legs and entered me. Slowly, sensuously. I discovered then that he was more sensual than sexual. A more dedicated lover than his dark clothes and black overcoat would predict. A man who could thrust into me with might while his lips kissed me.
And so he made me come. I longed to touch my dick, to finish me off. But the wouldn't let me move my arms from above my head. He pinned me with his hands and his dick to that bed and I came without touching myself.
It was the first of many times with Floyd. I eventually graduated to full restrains and a gag-ball. He fucked me in his apartment, my apartment, a motel. He would hold my hand when walking with me. We would go dancing and still he refused to dance, so I would oblige and give him a lap dance. And he would smile at me, his beautiful teeth shining in the dark, his eyes sparkling.
I haven't seen him lately. I saw him last winter, when I went to one of my favorite stores in Pittsburgh and somebody hugged me from behind and whispered 'and what have I got here?' in my ear (that's what he always told me when he took me from behind). It was Floyd, with his gal pal (a fantabulous lesbian with impeccable taste) who had seen 'somebody they recognized' from across the street and had come in to say hi.
We are not in touch anymore, but I still remember how I really enjoyed losing control and being sexed up by this guy who hold so many surprises under a composed and apparently innocuous exterior. I've never judged a book by its cover ever since. And always look at men who are smart and unassuming with a different eye. Who knows? Maybe I just need to be tied up again to lose myself and find my mojo.
Have you got any rope?