Are you the one they call ... Beowulf? 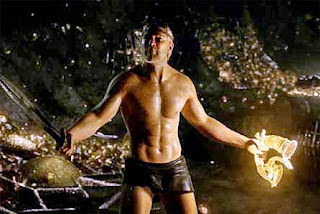 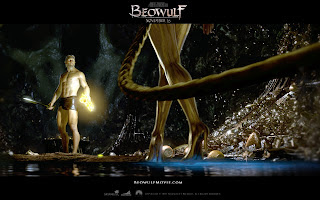 So does Angelina Jolie greet my latest crush when he steps into her lair. This new guy, mind you is way beyond hot. Rippled muscles, long-ish hair and the bravado of a thousand frat boys. Oh, and he does not exist. He's totally made up from his bubble butt to his thick fingers. I just came from seeing the latest creation of Hollywood a man who is played by an actor who is almost entirely reconstructed in a computer.
But still, the magic grabs you, well, by the balls. This Beowulf comes with the nakedness we didn't get in 300 and with the cachet of having been taught in millions of classrooms. Hopefully, this film version will bring all those 17-25-year-old gameboys to the yard. My verdict? Brainy never looked hotter. Wanna dip into the 6th century and get some beefcake? Go see the movie. Here's the prologue, to whet your appetite:

LO, praise of the prowess of people-kings
of spear-armed Danes, in days long sped,
we have heard, and what honor the athelings won!
Oft Scyld the Scefing from squadroned foes,
from many a tribe, the mead-bench tore,
awing the earls. Since erst he lay
friendless, a foundling, fate repaid him:
for he waxed under welkin, in wealth he throve,
till before him the folk, both far and near,
who house by the whale-path, heard his mandate,
gave him gifts: a good king he!
To him an heir was afterward born,
a son in his halls, whom heaven sent
to favor the folk, feeling their woe
that erst they had lacked an earl for leader
so long a while; the Lord endowed him,
the Wielder of Wonder, with world's renown.
Famed was this Beowulf:1 far flew the boast of him,
son of Scyld, in the Scandian lands.
So becomes it a youth to quit him well
with his father's friends, by fee and gift,
that to aid him, aged, in after days,
come warriors willing, should war draw nigh,
liegemen loyal: by lauded deeds
shall an earl have honor in every clan.
Forth he fared at the fated moment,
sturdy Scyld to the shelter of God.
Then they bore him over to ocean's billow,
loving clansmen, as late he charged them,
while wielded words the winsome Scyld,
the leader beloved who long had ruled....
In the roadstead rocked a ring-dight vessel,
ice-flecked, outbound, atheling's barge:
there laid they down their darling lord
on the breast of the boat, the breaker-of-rings,2
by the mast the mighty one. Many a treasure
fetched from far was freighted with him.
No ship have I known so nobly dight
with weapons of war and weeds of battle,
with breastplate and blade: on his bosom lay
a heaped hoard that hence should go
far o'er the flood with him floating away.
No less these loaded the lordly gifts,
thanes' huge treasure, than those had done
who in former time forth had sent him
sole on the seas, a suckling child.
High o'er his head they hoist the standard,
a gold-wove banner; let billows take him,
gave him to ocean. Grave were their spirits,
mournful their mood. No man is able
to say in sooth, no son of the halls,
no hero 'neath heaven, -- who harbored that freight!