Man in the mirror 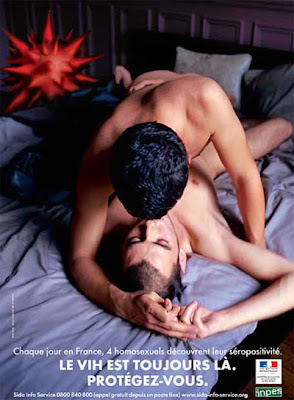 I have always insisted that when you're going to talk about things in general, it's better to start with yourself as an example. In this case, it's the whole AIDS thing. I know, I know. We all talk about it, think about it and preach about it. But many of us still enjoy thinking about the whole 'bareback' thing.
Yep, I said it. Bareaback. Even though we all read how we should take care of ourselves, always wear a condom (or ask the man who's fucking us to wear one) and the perils and dangers of not wearing one, we still enjoy the THOUGHT of fucking without one. Don't believe me? Just type 'bareback' in any of the myriad porn freebie sites and you'll see what I'm talking about.
Be it x-tube, red tube, gayforit, anything. Just typing the word will get you several pages of videos to choose from. And not only the 'professional' videos (like Treasure Island and the such) but countless amateur snippets and sometimes longer-than-five-minute little opus filmed with a home camera and sometimes probably a phone. And they vary from the couples filming themselves having sex to tricking in a restroom to men blogging about it. I myself follow closely the adventures or a Montrealer right here in blogger. And I have to admit I enjoy reading his exploits.
And I guess it's because no matter how much we are warned against it, like moths to an open flame we still seem to be attracted to it. Whether watching it, reading about it or doing it, barebacking is still practiced and coveted. Why could this be so, you -and I- wonder? Maybe a reckless predisposition? The desire to to go against the grain? The enjoyment of skin against skin? Fearlessness? Irresponsibility? Immaturity? Lust? Voyeurism? Craving the forbidden fruit? Rejection of the rules of a moralistic, patriarchal society?
Whatever it is, it's causing problems. Not among the guys who have seen many of their friends die of the disease, but among the younger generation (as this Towleroad post tells us) who, thanks to drug cocktails and medical care have been surviving more and more the infection. But who are infected, nonetheless
What is causing this raise in infection? Is it that sense of immortality that the young have? Is it the thrill of the forbidden? Is it plain idiocy?
Whatever it is, it's infecting hordes of young men who, on the one side, have not witnessed the devastation the disease can cause (about twenty years ago every gay man in different parts of the globe had known at least one person who had died of the disease) and on the other, have come of age at a time when drugs keep the most horrifying effects of the HIV virus at arm's length, without the wasting effects it had on people let's say ten years ago. But as Joe.My.God posts, they do not consider how they'll grow old and the price they'll have to pay if they do get infected and submit their bodies to medications that have not been tested in the long run.
I'd suggest it's just hedonism, but I know there should be more to it than that. I sometimes wonder what I would do nowadays if I were to shun my little latex buddy. I know I have missed the most amazing cocks just because I knew a condom was not available. But also because I did not completely trust the man attached to that cock. But what if I really, really wanted him? What if it were one of those once-in-a-lifetime fucks? And what if I trusted him? What if he was my boyfriend? What would I do if he asked me to go bareback? What would I do? Now with the French censoring the picture that graces this post, and Bilerico writing about the future of lube, I have asked myself the same question. What would I do? And you?
Email Post
Labels: barebacking confessions porn sex