Yeah, right. I knew that. I watch FAUX 'News" 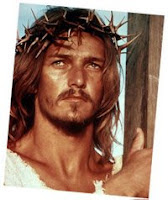 Given the brouhaha that the whole Geraldine Ferraro thing caused (she basically said that Obama was were he was because he is black) and her consequent resignation, you have no way to doubt how fiercely entrenched in race the U.S. is.
But I just found one of the sharpest, wittiest and intelligent blogs out there dealing with wingnuttery and idiocy.

It's called Jesus' General and it's the shit. Trust me, if I could write that well, I'd quit my fucking day job. They nail the idiocy, the blatant ignorance and ingrained racism and xenophobia of the wingnuts:

Jesus: The "H" stands for "Halvor"
I don't know what angers me more: Jerimiah Wright's statement that Our Lord Jesus, was black, or all the libislamunistofascists saying he's brown. Haven't they seen the pictures? He's as blond-haired and blue-eyed as Popenfuhrer Benedict XIV.

But I guess I can understand some of the confusion. He was a Nazarene after all, so it's not surprising that so many people think he was Jewish and Semitically hued.

Still, it's frustrating that people ignore the most important clue about our Savior's ethnicity, his genealogy. The reason it's so often overlooked is due to the influence of liberal academicians and theologians who have for so long have suppressed the true history of Israel. Indeed, they've done so so effectively, about the only place you can find it is on Stormfront.com (you may be aware of Stormfront due to it's favorable coverage on Fox).

Although Jesus' mother, Mary, could trace one ancestral line to King David, the rest of her family tree was firmly planted in Bar Oslo, Bethlehem's Norwegian Quarter. It was a vibrantly Scandinavian neighborhood, a place where all the ethnicities of Bethlehem (except the God damned Swedes) gathered to dine in the Norwegian restaurants and dance the Eikerril until the wee house of the morning. Much of the legacy of that neighborhood lives on today. The fur-lined Viking helmet, for instance, became the shtreimel. And lutefisk? Now, we call it gefilte fish.

Mormons would take it another step and point to God as the physical father because they believe Elohim (who looks a lot like Edgar Winter would have looked had he joined ZZ Top) came to earth in the form of a swan and impregnated Mary (presumedly after showing her his collection of Barry white LPs). But Jesus H Christopherson, that's just nuts!

I love it. This country is totally contradictory and that is sometimes good and sometimes it drives me nuts. But hey, variety is the spice of life, isn't it? At least that's what my grandma used to say. BTW, that hot piece in the picture is Ted Neely, one of the (many) Jesus I saw while growing up. And not that I think of it, because they were all Hollywod'd version of Jesus (and marketed towards the wingnuts of yore, much more harmless that the vipers that now crowd the pulpits) they were all fucking blond and blue-eyed. I'll be damned!
Email Post
Labels: IDIOCY RACE wingnuts