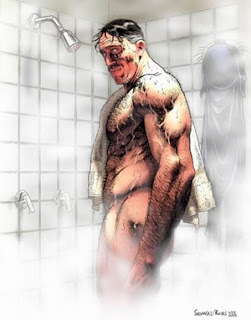 I know. I should stop the whole social networking thing. I actually got in trouble for 'doing it' at work. But that's another story. This one has to do with my some of my friends being on Dlist and me getting all questioning as to 'why?' they are there.
I know. It's kind of silly. It's a social networking site. DUH! that's what they're for. Yeah. Sure. The thing is that this one guy, who is your typical Log Cabin Rethugliclown (staunch republican, somehow entitled, very conservative in matters of who's the man of the house -he is- when it comes to his boyfriend, very dry, somehow stuck up, very "I'm an American so I deserve everything", you get the picture) is in Dlist. Naked. Right.
My reaction, exactly. One never knows, though, what goes on behind closed doors (plenty) but I had this guy pegged as somehow closeted, VERY cautious about the whole 'gay' thing, etc, etc, etc. And then I go and find out he's fucking naked in a social networking site.
Yeah, the whole Log Cabin thing immediately tells you there's leather involved, a sling and plenty of poppers. Kidding. But it does tell you that the sex is slightly kinky. And probably good. Guilt makes for a great aphrodisiac. And that's what I've realized throughout my times (and life) and dealing with all kinds of men who fit this 'conservative' mold.
They seem to be really stuck up, really intense in a I'm-a-explode-one-day kind of way to witch yo add some complacency (slight paunch, a penchant for expensive restaurants and trips) and a totally hot approach to physicality (you know they'll place a hand on your ass when you're wearing tight jeans). I know. Contradictory. That's why I should not have been surprised to find his pictures online. I should have known.
Most of the men I have known (never dated, mind you...) who kind of fit the profile of the semi-closeted, tightly-wound Republican have always been somehow horndogs at the end. A little bit sleazy. Kind of hot. Because nothing makes up for hot, sweaty, urgent, forbidden sex like repression. At least for the Larry Craig type, who really craves male contact -and obviously enjoys it- but that apparently gives in reluctantly to it. Such is the case with this one guy.
Apart from being surprised by the finding, which I shouldn't (I was looking for smut, duh!) now I can't help but look at him in a different way. He's been humanized, somehow. He's become more of a man than this set of stereotypes and assumptions that I had of him (not that I know him any better, mind you) but I guess that after seeing someone you know naked, you kind of feel different towards them.
Come to think of it, I shouldn't really think about him that way. I'd be breaking one of the 'friend' rules. Wouldn't I?
Email Post
Labels: gay men kink