What have you done today... 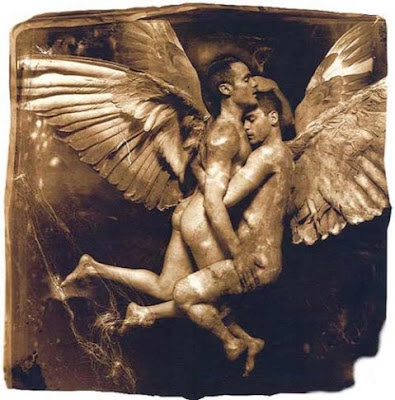 It was the two-weekend-Pride-marathon of the year. I went to three Pride celebrations and I have to admit that I had a great time. I saw cool acts (The Cliks!) I danced to awesome music (live DJs!) and I marched with brothers and sisters in arms. What else is a gay boy to ask for?

Yeah, I know. Equality and all that. But this is America, so there is an uphill battle to make the stupid backward ignorant Religious Wrong that they have no business in my pants or life, for that matter. I did not see many of the wingnuts in the parades this year. Maybe because I was not paying attention? Maybe because I just was not at the right place? I don't know. I remember that last year I saw them in Chicago. And in Cleveland. But this year? Nothing. Nada. Zilch.

And that's good. Because even though I don't think that they are any less rabid, I do think that they will not have the same preponderance they had all these years, with the idiot W in the presidency (well, that is giving him too much credit, we all know that it was his 'advisors' who actually ruled this country) and his ass-licking to the fundies, who may or may have not put him in power for four more years.

It's all fucked up. But it could be worse. It could be like in Saudi Arabia, where they can hung you just for being an 'alleged' homosexual. Or in Jamaica, where hordes can beat up a man an reduce him to pulp without anybody -even less the police- doing anything to stop it. Or like in South Africa, with their foaming-at-the-mouth intolerance and barbarism.
So my Pride celebrations were good in general. Good company, big fun and most important, the feeling of being part of a big brotherhood of men who are just like me. And some of them are totally in the 'blessed-genes-category'. I got an eyeful of eye candy every day. Gay men ARE beautiful. Damn! ALL of them. The fems, the daddies, the bears, the muscle Marys, the average Joes. All of them are beautiful in their own right.

And it feels good to feel that you are not alone. I pity anyone who is in the closet. I'd rather have someone hate me for who I am than love me for who I'm not. And that quote is not mine. It's from Obama Pride. I read it many times in each one of the Pride parades I went to. Hopefully, he'll be the next president of the United States. That will teach the millions of idiots who voted for Bush a lesson.

Now, let's wait for next year. Things can only get better. Or so I wish.
Email Post
Labels: celebrations gay men pride wingnuts.