Tied up and down 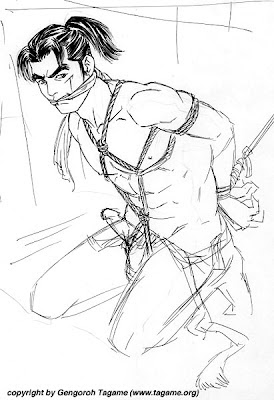 His name is F. I met him in Pittsburgh, while I was the token grad student in a project that studied gay men's habits and health. It was a riot: they would give you awesome physicals and HIV tests twice a year for free and all you had to do was to answer a few questions and doodle on some test sheets. It was fun. And the doctors were cute. I have stories about those times. But I digress. And I don't want to. This needs to be written today.

So F and I got to be friends. He and his roommate used to hang around with me and I laughed my head off at their antics. Fuck, I miss those times. Anyways, back to F. F had the most beautiful eyes ever, hair down to the middle of his back and was one of the best kissers I know. And you know I cannot resist good kissers. So F and I got to be pretty tight. I would drop by their office on Fridays (he and his friend worked together) and we would go to the South Side and roam little stores and eat standing on doorsteps. Then we'd take the incline and go to their house with their cats and laugh until one in the morning. He would call a taxi and send me home and would pay for it in advance. A total darling. And we were not even shagging at that point.

You see, I discovered F's kinky side by accident. One Saturday, when his roomie was not home, we got to kissing and groping and horsing around and I would let him pin me to the floor. It was intoxicating having a bigger man all over me (F is around six one and husky, just delicious) and suddenly, he asked if he could tie my hands with a bandana. I immediately said yes, blood flowing freely below my belt. It was the start of more and more daring games between F an myself. I really relished on the power he had over me. He didn't even have to tie me up after awhile to make me submit to his touch without a question. It was all in my head, I guess. Bondage by brain. Because your brain is your biggest sex organ.

So we quickly progressed from bandanas to rope (it burned my wrists) to bandanas under the rope, to masking tape (messy and sticky but effective) to ties (handy when we were at my place) to a gagging ball to full-on restrains (courtesy of a sleazy store in Lawrenceville). I realized I really liked the whole thing. I liked the idea of this big man overpowering me and making me his in any and several ways. And the most awesome thing is that in all the time we were 'together' (if you can call it like that) is that he never once made me feel uncomfortable or caused me any kind of pain. He would take his time tying me up, dick hard and hands steady, and then making slow love to me, licking my toes, nibbling my earlobes, sucking me off and licking my back and legs up and down. He would blindfold me with a bandana and gag me with a ball gag we got together and I even got over the taste of that darn ball. It was overpowering when it was new, then he would lick it off my mouth. It was a whole new experience for me to relay in other senses when I could not touch him or see him or taste him. My whole body would become aroused, goose-bumps all over me, breathing paused and deep, all my attention on what he was doing to me. He had control over my pleasure and I liked it. And he gave me plenty of it.

Most days it was my hands tied over my head in a simple knot, his body all over me. Sometimes he would go all out and copy some knots from bondage pictures I got off the 'net. Oh, google. Ever so helpful in matters of kink (I actually have now a tattoo that came from one of the printouts I made for him). Some days he would tie my thighs to my calves and make love to me slowly and very sensuously. He did not have a big dick and he did not need it. All he needed was what he had and those hands and that mouth to make me come like there was no tomorrow. It was my first experience with soft bondage and I really got into it. I had never been into the S&M/leather/daddy/hankie scene but what I did with F, I really enjoyed. I have not let anyone else do those things to me ever since, though. I have not trusted anybody like that and I wonder why. Maybe I'm afraid I'm gonna get hurt, or I don't feel comfortable with my body. Or whatever the cause. But F. never gave me that vibe, I never felt but safe and hot and sexy with him. We even decided that I'd use the word 'truck' if I ever felt uncomfortable. I never uttered it. I did say 'fuck' a lot. I made sure that first consonant was clear so he did not stop what he was doing to me.

Looking back, even when he had me tied and blindfolded in his bed, he was one of the most tender and careful lovers I've had. He made me understand that my power was not in what I wanted him to do but in what I let him do to me. He also put me in contact with parts of my body that I had neglected for years, not having given them enough attention and also made me like my body like no other man had after him (and very few did before him). It was a sight, when he took the blindfold off and the gag ball out of my mouth and I could see his big chest hovering over me, his hair all over the place, his sweaty face and smiling eyes looking down on me. And then his lips were on mine, his tongue exploring my mouth and his hands all over me. And it was liberating, to tacitly incite him and then let him do whatever he wanted to do to me, letting my mind and my body be free and enjoy every lick, every suck, every touch, push, probe, thrust, coming from him. And then we would take long showers together after we'd come and I would wash his long hair and would let him scrub my wrists to get the gunk from the masking tape off.

In those months we were 'together' (we never officially 'dated', it was a very cool, laissez-faire relationship) I discovered I liked to give up control, that I liked being topped and tied and bound and blindfolded by this man who was bigger and stronger than me. And I think what I really liked and enjoyed tremendously was the tenderness behind the kink, the softness of that burly man, his lusty tongue and his gentle hands. The idea that I was safe in his bed, even though I was helpless in those ropes. I have not felt like that in a very long time...