I just want your extra time and your... cash? 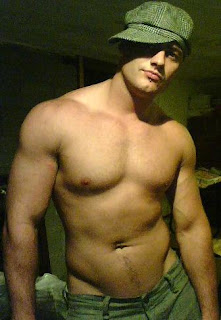 Ok, this may sound lame, but I have never been one too prone to go to stripper clubs. I know. Told you it was kind of lame. I don't 'feel' the lure of the naked man dancing in front of you, officially for your enjoyment and obviously for his enrichment. Sex for money has never been one of my turn ons. I know that many men enjoy it, but I'm not one of them.
If a guy is going to be naked (or half naked) in front of me, I want to taste him, to touch him, to be able to reach down and grab him. With a stripper all these things end when your dollar bills end. And I -as you say- that's not the way I roll.
I find strippers to be easily recognizable. There's something about their beefy/muscley/twinky demeanor in them that spells m-o-n-e-y before s-e-x.

They do tend to be much more handsome and in to be in much better shape than the average Joe (well, duh! is their livelihood we're talking about here, people) and in an overwhelming majority, better endowed than your garden variety of man. And they obviously get off in the admiration and the longing looks they get from their less fortunate brothers. And they are more than willing to share their assets with you. For the right price. Be it a dollar in their thongs or a hundred in their wallets. And I imagine that that takes a toll.

I just had the chance to 'meet' a stripper last night. But I could have sworn that I KNEW he was a stripper before he even got in that little room they have in the back of bars and came out in a black skimpy bottom. It was ... I guess that 'air' he had about him. Somehow guarded, somehow relaxed. Half-self-deprecating and half-cocky. The stance of the man who knows he's got what other wants (that also translates to your garden variety of guy, like you, babyboy, who know that they have a beautiful dick and walk through the world accordingly). The look of the guy who knows he's gonna get you hard. Either if you want it or not. And he did. I have to admit that. The blood did run faster south than usual when he was two inches away from me and I could see his nipples standing at attention and the throbbing in his trunks. He was indeed a sight to behold.

So his name is Justin (really?) and he had some kind of accent (Midwestern?) and a tongue piercing. And the most beautiful chest I've seen in the last six months. And beautiful arms. And beautiful thighs. And a class-A ass. And he was flexible (boy, was he flexible!) and hung. Really hung. I know because I peeked into those thongs. He came to where I was with my friends (two locals, two visiting from California) and saw the chance to make money. Of course he came for the money. Anybody who thinks that strippers talk to them or let them touch them just because of themselves are sorely wrong. They've got what you want, you've got what they need (as Donna Summer put it so long ago in Bad Girls) and they know how to get it. And they will. Even if they have to make small talk, even if they have to look like they find you interesting, even if they have to fake a smile and a wink. They want your money and they will get it.

So Justin was beautiful. And his body gave me a boner. But I left him with my friends and left. Because it was late and because his beauty was somehow tainted. Not because he sells sex (in one way or another) but because it's an empty promise. All that beauty is at the service of... Justin. Even though so many men touch him and ogle him and want him, he's in love with himself. And nobody else. And I'm sure it would be very difficult to be loved by him. Because you will never know if he wants you or if he wants you for your money.

I imagine strippers (like porn stars) do have a private life where they are warm and nice, and loving. But that's not the persona you'll find in a bar, gyrating and letting you take a peek at their family jewels. The man you see at the bar is there for business. If your business is exchanging money for sex, then you are a match made in heaven. But if your business is connecting with a man at both the emotional and physical level for more than two minutes, you are in for disappointment. In a big way.
So I guess I'll just keep ogling men that do not cost me anything (or maybe a minimum amount, let's say in electricity) and that allow me the pleasure to help me come. They are not living, breathing beings, you'd say. And neither is Justin. The Justin you touch in the bar and who's stripping for you and three hundred other possible customers is as real as the guy in the picture at the top of this post: he is what you want him to be for the right price. And for me, that price is not a ten dollar bill in a thong. I'll take the boy on the screen any time. At least, I know he won't be looking at my wallet when he completes his round at the bar...
Email Post
Labels: gay men lust. strippers