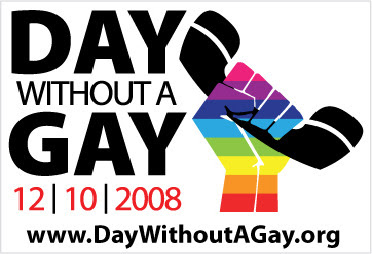 Besides being International Human Rights Day yesterday, it was also Day Without a Gay, in which both gay and straight people were encouraged to call in to work and not go and instead go volunteer for some cause. I did that. I went to the ATF and wrote Christmas cards for AIDS patients. I also helped with mass mailings and got in touch with the youth outreach coordinator to do help her get in touch with our LGBT group at the University. And it felt good.

It felt good not because I did not go to work, or because I made a statement. It felt good because I did something for somebody without expecting anything in return. If the cards I wrote make one person happy during the holidays, I'll feel that my job was done. But many people did not think that. Many of the people I invited to go with me told me it was 'useless' and 'a waste of time', that we 'better do other things'. I disagreed. I think that by doing small things is how you get to bigger accomplishments. In this country, where bigotry and ignorance rule, changing one mind at a time is what works best.

The lemmings that are the indoctrinated will never change their minds as a collective. But you can change one of those minds and make them see that you are just like them by example. Because I'll make sure that what I did gets to the ears of the idiotic and the dogmatic. The religious right minions hide behind a waterfall of words that belie their truly hateful soul. The preach love and never practice it. Well, I'll preach love and practice it. To show them that I'm better than them, that the spirit they want to thwart will never give in to their ignorance and will never stop helping others.
So that's why I called in gay yesterday. And I'd do it in a heartbeat again. And next year, I'll make sure I bring more than one friend with me...
Email Post
Labels: AIDS charity gay human rights straight