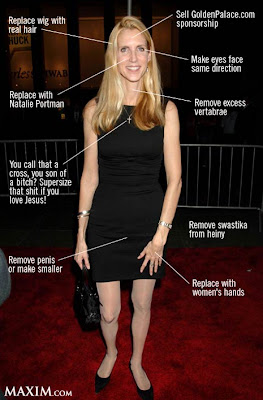 My car is in the garage, classes start in a few days and it's fucking cold outside.
Nothing like a good laugh to keep me in track.
Ann Coulter, conservative bitch extraordinaire is doing the rounds on TV trying to sell her trashy book (where she trashes liberals, and manages to offend single mothers, people of other races, and in general anybody with a little bit of intelligence) and she was just banned from one of the big ones (NBC saw the light).
I know I should not hate people (BAD KARMA!) but I totally hate her and wish her the worst. But instead of learning some voodoo and grabbing some pins, I'll just repost this amazingly funny and offensive post who made the internet rounds a few years ago:

It's called "I fucked Ann Culter in the ass, hard" and it's HYSTERICAL!

The Farmer’s Market on Fairfax and 3rd is a Los Angeles landmark, attracting tourists and everyday Angelinos alike, as well as many famous faces. Among the celebrities I have seen there are Muhammad Ali, Terri Garr, Tyra Banks, Laura Linney, Keenan Ivory Wayans, the guitarist for The Cult, Lawrence Hilton-Jacobs, and Weird Al Yankovic.

But Ann Coulter is the only celebrity I’ve ever spotted at Farmer’s Market that I wound up fucking in the ass, hard.

It would be fair to observe that my feeling obligated to present the list of celebrities above in roughly Black-White-Black-White order is indicative of my own carefully Liberal sensibilities. And that this sort of conscientiousness is more than a little ridiculous, on examination. But what I notice about myself only on reflection, Ann Coulter seemed to recognize and respond to in an instant, like a puma recognizes an injured giselle. For Ann Coulter is a predator. A predator with a hungry asshole.

I first spotted her sitting at a table in front of The Gumbo Pot with another woman who looked not unlike her, but a generation older (I neglected to ask her at any point subsequently whether this had in fact been her mother). I vaguely recognized her—there’s always a lag time placing faces you know from cable when unconfined to a telescreen—and began to notice, stealing furtive glances up from the copy of Steinbeck I was reading, that she was eyeing me with unsettling scrutiny.

The next thing I knew, her companion (mother?) had left and Coulter was standing over me, looking skeptically at my reading material.
‘The Grapes of Wrath, huh?’
‘Yes’ I said, faking composure. ‘It’s fantastic.’
‘It’s a fantastic primer for vacuous proto-Communists everywhere,’ she said dismissively.
‘I don’t know about that..’
She sighed. ‘I don’t have enough ink in my pen to keep a running list of what you don’t know. May I?’
She motioned to the empty chair next to me.
‘Of course.’ It would be fair to say my voice trembled a little.
She sat and said nothing. Ann Coulter evidently takes an unappreciative view of small talk. That she was eager to continue antagonizing me became evident when I re-opened my recently-insulted book to resume reading. A young man passed in a t-shirt proclaiming ‘Iraq Nam’. She stopped him.
‘1. Haircut. 2. Shower. 3. Get a job, you sniveling hippy,’ she glowered. ‘You’re probably too high to remember that, so write it down--if you can write.’
He looked at her with dismay and scampered away like a kicked cat. She turned to me with bloodlust.
‘What do you think of the war: complete success, or very nearly complete success?’ she asked.
‘Well, in no time—barring the strong possibility of Civil War--we’ll have a democratically-elected anti-US Islamicist government in charge of the world’s second-largest oil reserves, so I’d have to say only very-nearly, on the complete success scale, at a hysterically distorted best.’
She showed her teeth. ‘It sounds to me like you don’t support our troops.’
‘I think that ‘Support Our Troops’ business is the most crass, craven cowardice ever to go unquestioned by the allegedly Liberal media.’
‘Yes? Yes?’ There was oddly growing excitement in her voice.
‘It allows the Administration to absolve itself of responsibility for its own flawed policy. It’s no different than if you sent a classroom of 2nd graders into a burning building, and when anyone objects you throw in their face that they "don’t support our 2nd graders"’
‘Where do you live?’
‘A few blocks away.’
‘Take me there.’


When we got to my apartment, she looked around glumly.
‘I was thinking you’d have half-burned American flags up on the wall,’ she said, disappointed.
‘That’s ridiculous. I love my country.’
‘Whatever you think that means,’ she said, rolling her eyes. ‘Don’t you have anything nasty to say about the President?’
‘Like what?’
‘Like he’s an imbecile, or corrupt, or a corrupt imbecile—the usual sore-loser bitter chatter.’
‘To be honest, I didn’t like the nasty things that were said about Clinton, and I’ve decided to have respect for the Office, no matter who holds it. I don’t think President Bush is corrupt or an imbecile anyway. Would you like something to drink?’
‘I think maybe this was a mistake,’ she said, starting to go.
‘That’s not to say I don’t disagree strongly with many of his policies and objectives.’
She seemed to reconsider. ‘Like what?’
‘I don’t know. Name one.’
‘Get me a drink first.’


With every point I expressed that ran counter to a view she held, she removed one article of clothing. Soon she sat on my couch naked, gently pulling at her untrimmed pubic hair, staring intently but not quite invitingly at me. The growing hard lump in my throat was just outpaced by the one in my pants. I was a little nervous because we had agreed on the last two points—the need to reconsider the option of nuclear energy, and drilling in the Arctic—and I noticed her oversized nipples were no longer hard. Luckily, she was, by this point, determined.
‘What do you think,’ she began provocatively, ‘of the President’s plan to privatize Social Security?’
I sighed with relief; this was as sure a promise to seal the deal as her asking if I had a condom.
‘I think it’s a payoff to the Americans the President has always been most intent on pleasing: the richest 1%.’
‘What do you mean?’ she cooed. I noticed her nipples hardening once more. She dropped to her knees in front of me. She pushed me backwards and positioned my legs up in the air.
‘A stock’s value is even now only partially tied to the actual value of any publicly traded company. But who’s going to profit from inflated valuations when stock prices swell irrationally from the forced, artificial injection of capital?
Her breath was hot on my ‘taint as she lifted my scrotum. ‘Yes? Yes?’
‘You might as well shoehorn billions of dollars into the Baseball Card market. The price of a Derek Jeter rookie will be driven up to hundreds of thousands of dollars—before the bubble bursts and the whole market crashes massively.’ It was getting hard to stay on point as she tongue-fucked my shitter vigorously.
‘Don’t..Stop!!’ her contorted mouth pled from my butthole.
‘The top 1% will sell stocks at the inflated valuations to the novice investors-by-necessity, the market will swell and crash, and the same 1% will come back and re-purchase their holdings at pennies on the dollar. Meanwhile, Social Security will go bankrupt and all the novice investors will be eating catfood for the duration of their "golden years,'’ barring a massive Federal bailout several hundred times in excess of what the Savings & Loan scandal cost us.’
She sprung up on the couch on all fours and looked over her shoulder at me. She pointed to her twitching, puckered anus. ‘See this?’
I nodded eagerly.
‘I want you to wreck it.’
I spit on my skeezer-pleaser and, prying her ass cheeks apart like a hot dinner roll, drove it home, into the biggest browneye I had ever seen. She gurgled contentedly. Every thrust of my babymaker was met with a wrenched squeal as I grabbed her by the hips and began really leaning into it.
‘Harder!’ she begged, ‘Harder!! Tell me what you think of Chomsky!’
‘I..think..he’s..brill..iant..but..I..don’t really agree with much of his stance on Israel, and--’
‘You’re slowing down!’ she snapped. ‘DON’T SLOW DOWN!’
I went back to punishing her asshole, giving no thought whatsoever to compassionate conservatism as her chocolate socket gnawed on my pork pipe. She was babbling now, as out of a delirious reverie.
‘Feed it,' Ann Coulter rasped. 'Feed my hungry asshole!'
I buried her face in a throw pillow and she swiveled her hips back on my fuckstick with obvious appreciation. My pace quickened as my man-magma built towards eruption.
‘Wait!’ she gasped, sensing the fuse on my yogurt cannon was burning quick. ‘I want to take you ass-to-mouth!’
I withdrew from her puckerhole with an audible ‘pop’ and she scrambled around, gulping at my wang-dang-doodle as though the lives of all her loved ones hinged on her marks for enthusiasm. Her eyes rolled up pleadingly as she threw her head down again and again on my magic johnson. I knew what she wanted.
‘There is a specter haunting Europe,’ I began, and she started to convulse spasmodically with her own thrashing orgasm, her head now dribbling in a blur against my groin. I repeated every Karl Marx quote I could think of until I reached my own ‘historic inevitability’ and launched surge after surge from my hairy boda bag. I ejaculated with what seemed like enough force to blow out the back of her head--but her head was made of stronger stuff. She sputtered, gobbled and gulped what I’d have to call a very liberal, even radically so, quantity of hot splooey.
Once she caught her breath, she wiped her mouth, stood, and took me by the hand.
‘Let’s go to the bathroom.’
‘Why?’
She seemed surprised I had to ask. Her tone was that of someone reminding another of something too obvious to need mention.
‘Uh, so I can get in the tub and you can piss all over me?’

I sat in a robe and watched her as she dressed.
‘Will I see you again?’ I asked tentatively.
‘Sure,’ she said, pointing to the TV. ‘On that.’
Some moments passed. I tried to dispel the awkward silence.
‘Well, nice meeting you,’ I offered.
‘You’ve really got a gift for tedious small talk,’ she shot back.
I was a little hurt and, recognizing this, she softened just a shade as she reached for her purse to leave.
‘Hey.’
‘Yes?’ I asked.
‘Thanks for not staring at my adam’s apple.’
‘No problem.’
She let herself out without another word, and I sat in the late afternoon silence alone. I considered how it felt to be a disposable instrument in someone’s personal debasement fantasy.

All in all, it didn’t feel too bad.

Want another dose? Visit the blogger's other gems: Bachem Macuno

And then Keith Olbermann tells it to her as it is: