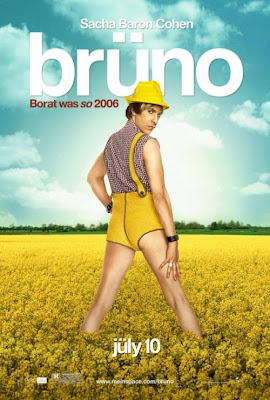 I cannot understand the allure of Sacha Baron Cohen. I did not see Borat and I won't see Bruno. I find his brand of humor crass and tasteless. A one-trick-pony shock jock. Much worse than the sophomoric, frat-boy humor of most American comedies aimed at the coveted 18-35 year-old-male audience. And that's something in itself.

And I'm not being 'political'. Even though all our opinions are always tinged by our beliefs and our 'agendas', I think that even from a gut-feeling kind of response I don't like his idea of 'funny'. Bruno does not make me laugh. And neither does Baron Cohen. I know that the masses will laugh AT the queerest than queer Bruno, at his asphyxiating flamboyance and his outrageous attempt to make the bigot even more narrow-minded. And that's what I don't like. People should be laughing WITH Bruno. Not AT him.

And the saddest part of it all? Bruno is preaching to the choir. The homophobe haters will hate him -and what they think he represents- even more and the clueless will laugh at the punked idiots who show their ignorance on the silver screen. Baron Cohen's intent of mocking the same prejudice he's provoking will go to waste because the viewer's mind is already made up. It's an empty orgasm. A wasted opportunity. Moving on, nothing new here. But still I think it's a pity it's such a waste. Just like with Borat, I think that I will just sit down and watch the reactions of people around me and will probably shrug. The most probable outcome? Lowbrow, backward, ignorant fools calling every guy they think is gay 'Bruno'. Ugh.

But why not see it, you'd ask? Why not do as I did with Twilight (which I still consider the epitome of purple prose and Mare-Jane sublimation) and go ahead and see the movies? Because I think I'd rather watch one of those 'Saw' movies and throw up at the sado-porn-smuff they pander to than watch human misery at its worst. To do that, I'd just have to watch The Passion of the Christ.

Maybe I just need to loosen up. And connect with the tacky, whacky side of things. And people.
Email Post
Labels: homophobia movies silliness