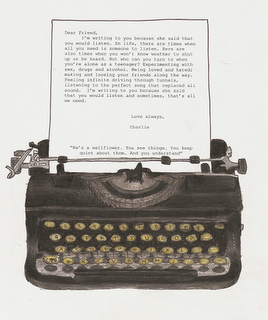 Wallflower:
A person, usually in high school, who sees everything and knows everything that's going on but doesnt say a word. They arent loners, they are shy and don't choose to be in the mix of things.
A person nobody pays attention to, and fades into the background, but are really genuine and interesting people if you take the time to get to know them.

I'm re-reading 'The Perks of Being a Wallflower'. And I thought of you. I remember the second time I read it I was 'seeing' you and somehow he book and my memories of you are kind of intertwined. Go figure. Your literary equivalent.

I am not actually reading the book, in the most usual sense of the word. I'm listening to it. I'm taking these long trips to Chicago and I'm listening to many books on CD during them. Listening to people reading good books to you makes the five hours of the trip go by faster. Or at least it seems to me to be that way.

So I was listening to 'Charlie' and his adventures and totally had this flashback to that time when I used to have those long talks with you, those walks, those nights at some other people's houses, watching people we scarcely knew get drunk with cheap beer and make asses of themselves, all the while thinking about when I could kiss you again. It was some kind of nostalgic, bittersweet memory. But I guess that's the mood I'm usually in when I remember you. I'd laugh, but it's five in the morning and it would sound weird.

I think it was one of those strange moments, when the driving to Chicago and the sometimes spastic narrative of the novel kind of brought you to my thoughts. James (whom I've seen a few days before) told me on passing you had been in Chicago for awhile (you came to be named on the conversation through some comment about myspace, go figure). So I think that also had to do with you popping in my memory while listening to Chboski's novel in the middle of I-80.

Funny, how I still remember you. I guess my memories of you have nothing to do with you or who you were or are. I've been known to be sketchy and selective in my memories of men I've liked. I usually tend to remember the 'good times' rather than the 'bad times'. So I'll probably remember you as the man you thought you were. Not the person you actually are. I know, I'm silly like that...