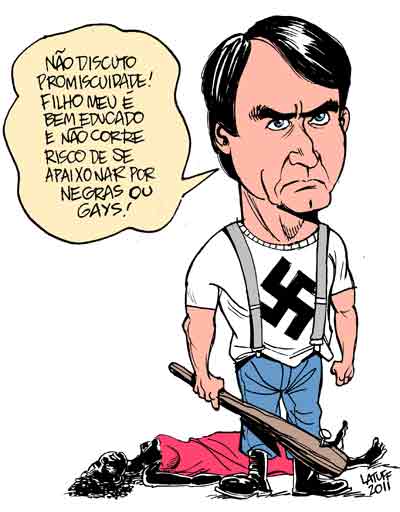 Apparently the trumpification of the world has started. We are seeing democracies that have started to be eroded by charlatans affected with delirium of grandeur who take ahold of the basest of feelings to climb the political ladder.

Here, John Oliver (bless his uncompromising mockery) takes on what Brazil is about to do: install another Trump in power. Apparently, they have not learned the Trump lesson. They want a racist, sexist, homophobic prick in power. What is wrong with people? Don't they have ears and eyes and see what is happening in the United States? Is their ignorance that big?

Jair Bolsonaro is racist, sexist and homophobic. He's a neo-fascist in the model of Putin and Erdogan, Trump's heroes (don't forget Vlad helped Cheeto win by tipping the scales hacking voting machines and using bots in Facebook and Twitter to incite racism, xenophobia and misogyny). Bolsonaro has used the same strategy Cheeto has used in the United States: stir fear of 'criminals', suggesting the use of government entities as enterprises sold to the highest bidder and using homophobia and misogyny to woo the wingnuts from the religious right.  Yep. The religious right in Brazil is following the example of the American wingnuts. Only thing missing is The Devil's Butler.

Have they not learned our lesson? Can't they see that a lying populist is not the solution to their problems? They believe they can 'domesticate' him, that's all rhetoric (does it sound familiar?). Brazil has already had a military dictatorship, with journalism being censored and virulent nationalism running rampant from 1964 through 1985. So what has been bad for the United States could be absolutely disastrous for Brazil. A government already mired by scandals and corruption does not need a far-right tyrant in power again. Fingers crossed he's not elected. But who knows? People in America apparently chose the clown over the lady with the Blackberry.