Born Francis Nicholls on January 18, 1955, Frankie Knuckles was an American House Music DJ, producer, label owner, remixer and tireless champion of the genre that would come to be known as House Music.
In the Bronx, Frankie Knuckles began to frequent discotheques during the 1970s. He was studying textile design when he began to DJ at underground New York venues including the Continental Baths. At the prompting of Robert Williams, Frankie moved to Chicago where Williams was operating a club that would later come to be known as The Warehouse. In 1982, Frankie moved to his own club, The Power Plant. In incredible second and third acts, Frankie Knuckles would play a key role as a DJ at Delirium during the explosion of electronic music and rave culture in 1987, followed by a seminal stint at New York’s Sound Factory Bar. In 1997, Frankie Knuckles won the Grammy Award for “Remixer of the Year, Non-Classical.”


This summer I got to see the new mural that graffiti artists painted to replace the one that was destroyed because the wall where it was painted needed to be repaired. It took three years for the mural to go back up and now, even it's not as visible as the other one (the other one was visible from the Blue Line) the new one is in the corner of a busy parking lot and it's as beautiful as the original one. It’s also proof that art does not end, it only transforms itself. 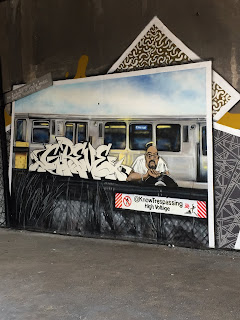 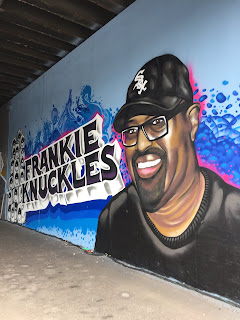 I LOVE House Music. I love the quasi-religious trance it puts me into. I used to go to many block parties and raves when I was in college. It was a mandatory rite of passage for gay boys in my time to attend these colorful, loud events where you could dance with three boys at at time or just by yourself and nobody would bat an eyelash. A small apartment, derelict house or abandoned warehouses were the place to BE on those Saturday nights.

I have tons of 12" vinyl records that I've gotten in some record stores who cater to DJs and crate diggers like myself. I have alternate versions of hits by the usual Divas (Madonna, Janet, Whitney) and prints by unknown DJs who have produced their own little jewels. I usually play them when I'm cleaning or during a rainy Sunday and they really take me back. Nothing like dancing on your own when there's not a dance floor nearby.

I guess apart from the obvious pleasure that I get from dusting while following their four-to-the-floor beat, listening to house music takes me back to that time when all I needed was a t-shirt, a pair of jeans and some Converse to be ready to jump to it. House Music really has that power. You just want to let go. I find EDM, the current interpretation of House, a little too stilted for my own taste.

I'm going to try and go back to that parking lot. Even if the music is over. Just to see how that mural is going. We even saw the artists giving it the final touches. It was about four in the afternoon and the party was just starting. I wish we would have stayed but it was a haul going back home afterwards. Frankie definitely left us a legacy. A legacy of rhythm and joy. Of light and music. Of creativity and art. Hopefully other generations will see the murals and go and check him out. Chicago and Detroit popularized House Music and today it's a world-wide phenomenon. The sound of gay clubs is now heard all around the world.

I would leave you with this amazing SoundCloud compilation that celebrates Frankie’s legacy. Go ahead, shake your hips.