Akin to the recently departed Charles Bradley, Jackie’s songs are laced with an acknowledgment of suffering but emboldened by a remarkable sense of self-possession. Hers is a story stoked by years of deep communion with music and an adventurous adolescence consorting with gamblers, hucksters, and performing in a traveling carnival. 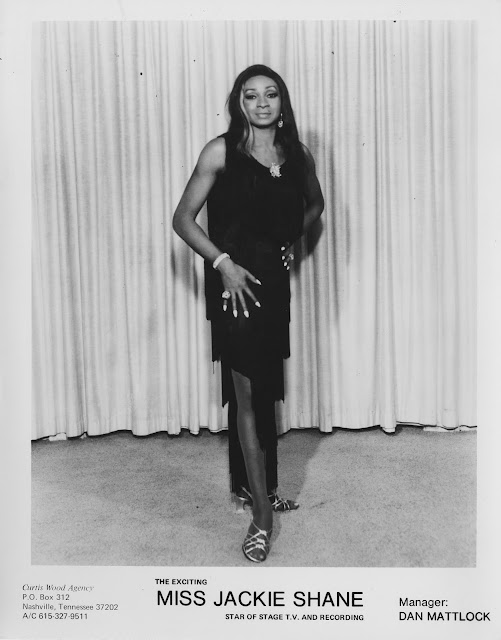 I learned Jackie Shane passed away from the most unexpected source: Pitchfork. The hipster online source of music news, even though several online outlets reported it. I had never heard of her but was curious about her being mentioned. Who was this Miss Jackie Shane and why was she being mentioned? And then I listened to her. Whoa. What a treat. The voice. The phrasing. Jackie was born in the 40's in the south and then she went to Canada, where she became a bona fide sensation. Can you imagine being a transgender woman in the fifties and sixties? If it's difficult now, can you imagine then? And when she sings, you can hear her southern roots bringing swagger and pain to the songs. Her sound reminds me of Amy Winehouse if she sang with Little Richard's braggadocio.

I love retro sounds and Jackie Shane is the real deal. I think she channeled struggle and turned it into an awesome sound that feels fresh and NOW and that's something that few artists can do. Jackie was born in a time where the police would arrest you if you were wearing clothes of the opposite gender. Trans brothers and sisters were brutalized by the police and society at large and nevertheless, there was Jackie, singing her heart out. Apparently she became a night club fixture and was totally idolized by night denizens for years. Then she disappeared in the seventies and her songs have resurfaced only lately. I wonder what would have happened if some big record company would have promoted her. But we all know that she would not have been Jackie Shane then. They would have scrubbed her of any identity and sanitized her image for the masses.

So Jackie never made it big. She recused herself, I think. Was it for better? We'll never know. But now her recordings are available and we will all benefit of her lyrics and her voice. She did not have the career of a Tina Turner or a James Brown, but maybe she did not want it. Who knows?

Meanwhile, enjoy her sound. And if you're like me, go get her records. Because I think that'll be my next step.