First of all, I like Kathy Griffin. I know she's not everybody's cup of tea (nobody is) but I've followed her career and I like her self-deprecating humor and love her irreverence. She's no Joan Rivers, mind you, but she doesn't need to be. Kathy has her own brand of stand up and I find it hysterical. Now that that’s out there, let’s talk about the first amendment.

The First Amendment (Amendment I) to the United States Constitution prevents the government from making laws which respect an establishment of religion, prohibit the free exercise of religion, or abridge the freedom of speech, the freedom of the press, the right to peaceably assemble, or the right to petition the government for redress of grievances. It was adopted on December 15, 1791, as one of the ten amendments that constitute the Bill of Rights.


No matter how you feel about Kathy (and  I know people have opinions about her), you need to recognize that she's right. It's the first time a sitting president goes after a private citizen this way. Unconscionable. But with Cheeto in the White House, nothing surprises anybody anymore. This president has committed more violations and is more corrupt than any other president in American history. And that's a travesty.

The Kathy Griffin situation was a preview of fuckery to come. At this point, we are getting numb in what concerns the abuse of power, the corruption and absolute kleptocracy that affects this government. This president is a bully who uses his bully pulpit to try and scare, blackmail and intimidate anybody who dares contradict, unmask or speak truth to power to him. He's the perfect tinfoil strongman: a thin-skinned, entitled, insecure, pedantic man-baby who has never worked a day in his life. His ideal of a man in power is a strongman: Duterte, Kim Jong Un and Xi Jinping come to mind. And of course, Vlad, whom Cheeto, a bully at heart, fears and admires at the same time.  What  Kathy did was paid the price of being irreverent and sarcastic and a little bit of an attention whore (which is something I think she admits and part of her occupation?) in the era of Agolf Twitler, a wannabe dictator.

But the point is not Kathy being an attention whore. The point is Cheeto being a thin-skinned sociopath with a Napoleonic complex who uses the highest office in the United States to seek revenge on anyone who dares say that the emperor, indeed has no clothes. And that, my dears, is America 2019. 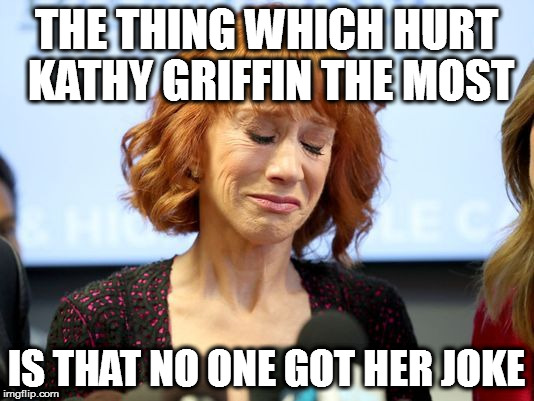