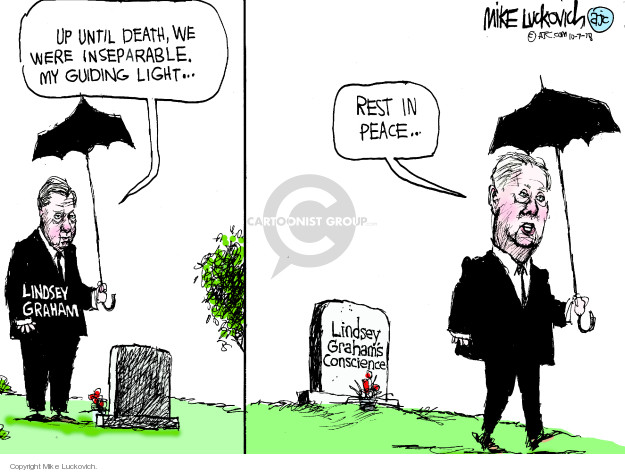 MIKELUKOVICH
We have all wondered what happened to dear (not) Lindsey Graham's conscience. It's gone, gone, gone. Not strange in a Repug, though. He went from warning people against Cheeto to justifying everything Cheeto does. Every. Single. Thing.

We all know that the repugs will put up with anything, ANYTHING! to retain power but Lindsey's 360 has been absolutely astonishing. From being a benign nuisance (all republicans are nuisances), Lindsey has become a defensor of the indefensible, justifying each and every mistake, gaffe, corruption scandal, racist remark and overall fuckery from the Cheeto administration and putting himself out there as a tinfoil dictator's defender.

I was taking to Bae, and I started coming up with theories about why is it that Miz Lindsey (bitch is gay as a goose, I may have no gaydar but this bitch.....) has bent over for Cheeto. Here's some scenarios I have concocted about the kind of Kompromat they have on her and it's rich in sex with minors because that's one of the main causes of flipping on Cheeto 360:

Miz Lindsay on video, in a crib, surrounded by black, buff, eighteen year old boys that change her diaper and then fuck her silly. Without leaving her crib.

Miz Lindsey has been a famous rapper’s bitch for the last ten years and there’s pictures of her  in very compromising positions being gang raped by said rapper and several of his closest friends. Repeatedly

Senario 5;
Apparently Lindsey used to visit OJ Simpson in jail and used to suck him through the bars while the whole floor watched. There’s pictures. And video. Lindsey was always in suit and tie. And an American flag pin.

Scenario 6:
There's video of Miz Lindsey being bukkaked by pot-smoking Haitian teens. She then proceeds to do voodoo rituals that involve being whipped with a leather cat o'nine tails drenched in the piss of ku  klux klan members while sitting in a Tiger Tyson replicock. She appears transfixed.

Scenario 7:
For the last forty years Lindsey has owned an all male whorehouse in Alabama that specializes in providing black and Latino escorts for closeted republicans and she’s tried each and every new call boy that gets to work there.  She keeps a file cabinet with reviews and videos of her with each one of them. And occasionally, their friends.

Scenario 8:
Vlad knows that Lindsey is part of an underground ring that traffics with brown boys and sends them to Russia to work as sex slaves. And he approves.

Scenario 9:
Miz Lindsey keeps a stable of men whose only job is to let her suck their toes after they have fucked her in a sling in her basement. These men need to be working class and preferably undocumented. She holds their passports in a safe in her home office.

So, that's about all I have. And you, do you have your favorite conspiracy theory about why Lindsey is Putin's bitch and Cheeto's doormat? Go ahead, I'm all ears.

P.S. I cackled when Patti Lupone came for Miz Lindsey:


Lindsey Graham you are a disgrace. On a personal note, why don’t you just bite the bullet and come out. You might just come to your senses.
— Patti LuPone (@PattiLuPone) July 18, 2019


And for the record, I don't find that tweet homophobic. She's calling a spade a spade...