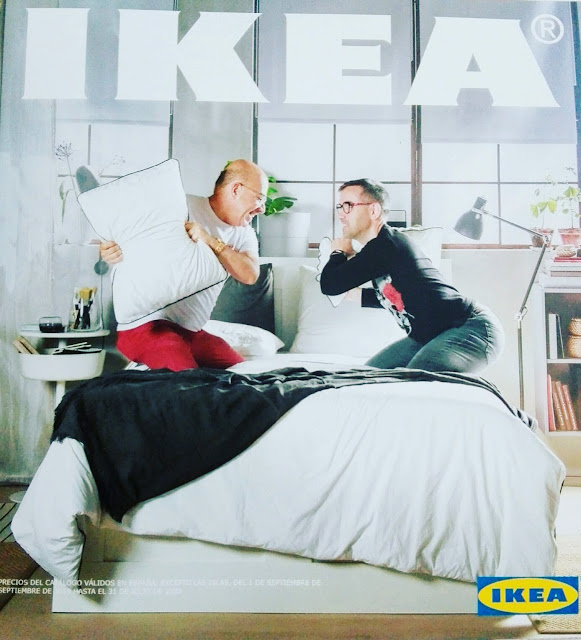 If you know me, you know I love Ikea.
Most of the stuff I currently own is a mix of cherished mementos, one or two things that survived college and a ton of Ikea furniture. It's kind of the perfect balance between the expensive and the practical. It's a step down from Room and Board and CB2 but that, like the Mini-Cooper that I keep promising myself will come one day. Ikea has allowed me to build a micro-cosmos of monochromatic peace and plant-filled coziness that helps me escape the craziness that is my job and everyday life. It's my refuge and castle.

This weekend I'm going to be making one of the trips that have marked my life every time I've moved. This weekend I'm doing my Ikea pilgrimage one more time. Last time I made one of these trips was a few years ago, when I moved from the family home to a smaller place that was a new open world to me. Now I'll be moving again, to a different kind of house, one that is still not my forever-house, but one that implies one more step in this gypsy-like life or mine. I am going to Ikea to get some things because I am going to fill in the gaps that will allow me to complement the records and the books and the photos I own. I will get some pieces that will help me rebuild my world and make me feel at ease in the space I'm in. We all use the safety blanket of the cherished to help us create our own little treehouse, that space that is uniquely ours, that cloud that lets us breathe.

If you know me, you also know that I loathe moving. I think that most people do, actually. The packing, the wrapping, the collecting, the throwing away. The waiting for the moving truck to arrive, the unpacking, the unwrapping, the realizing we cannot operate correctly until we have opened all the boxes and placed most of the furniture because our lives have been transplanted and there's still, for a few days the feeling that something is missing. That we've forgotten something. I'm not looking forward to it.

But this is a necessary move. I guess moving has become part of my growing up. I will have to start new routines, new schedules, new commutes. Paint some walls, hang some artwork, place a new sofa and some old vases. But it will also take me away from cherished moments, loving friends and the people that have helped me during some turbulent times. It will be much more than paying some extra tolls and driving some more hours a week. It'll give me some new freedoms and curtail some old ones. I'll still be in the suburbs (not the Northwest but the Southwest suburbs, natch) and I'll still be a stone-throw's distance from the train, fifteen minutes, as the crow flies, but it'll take a big piece of my life away.

I'll have new open spaces to explore, because it's close to some cute walking paths and forest preserves but my new zip code will imply some distances that cannot be overlooked. I'll probably let you know I like it in a few months how I am doing there. I may like it better. I may not. But it's not a matter of liking, it's a matter of having to do it to provide both a place to stay and to return the favor of peace of mind. It just has to be.

I imagine one day I'll do this moving to my own house, which may be like the house I dream of or it may take another shape or form. Meanwhile, I'll make sure I bring my trusty blue Ikea bag to put the things I know I'll get and to make a list of the essentials that I'll have to buy. It's exciting and a little sad at the same time. It's always fun to put the pieces together that will become our routine. It's nice to get some pretty things. I'll do my trek to Ikea knowing that every new beginning comes from some other beginning's end.

P.S. that photo is not really from an Ikea catalogue, I wish! It'd give the bigots a conniption and it would make me happy to no end. That's a an actual picture of people I love: my friend MerlinPurpura and his better half sent me that pic as an in-joke and I decided to use it here. Because the new will always become familiar with time, don't you think?