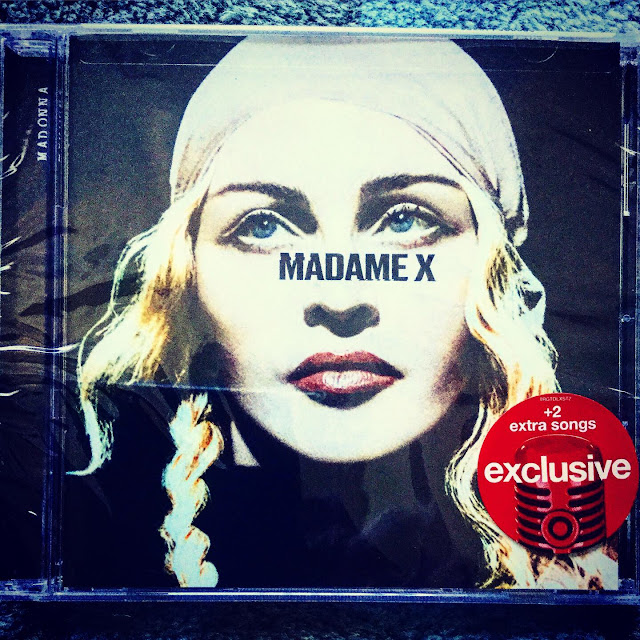 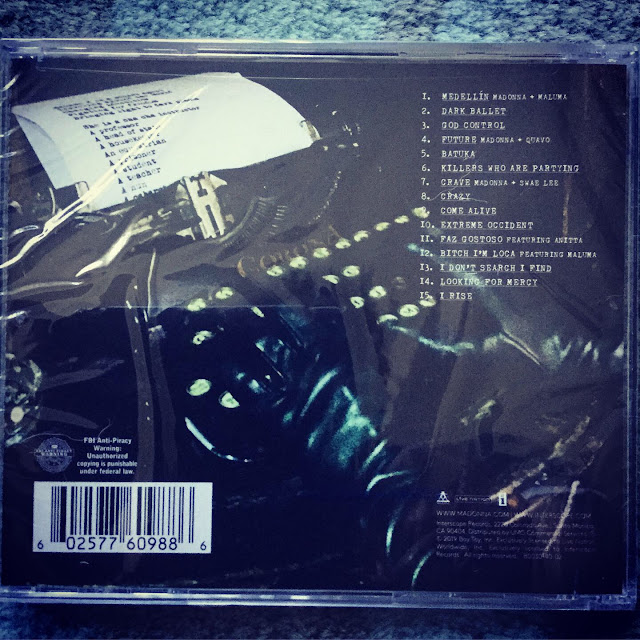 I just got my physical copy of Madame X. Yep, I still buy CDs. I still like to have CDs and vinyl records over MP3s or streaming music. I’m old fashioned, you could say. My whole Madonna collection is gone, though. I had every single CD she'd put out and many remixes and they were all damaged because they were stored in a basement that got flooded. So I lost them all. I was crushed.

It was borderline tragic. But moving on. So I went to Target (how suburban of me) and got the CD. Target sometimes has these little extras that I crave and I’m here for those. Mind you, I am not a music critic, or a musician or even a music connoisseur. I'm tone deaf and I can barely recognize autotune. So there.  But I am a garden variety gay man who's been a Madonna fan for years and that gives me the necessary credentials to do this. Also, Angelito was wondering about this record and I decided to give it twirl here on the blog.

Now, this is more about my experience with the album as a whole than a review. When someone like Madonna is going to drop an album you get all these snippets of what the final product will be, with promotional singles and public appearances giving you little glimpses of what the album will be. I wanted to sit down and listen to the whole thing. I like doing that because I don't really like the one-off song standing alone. That's good to get you hooked, but when I like an artist, I'd rather listen to a whole album to try and figure out what they wanted to say with it.

Remember that we receive the singles and either like them or dismiss them, but for the artist it's been months of hard work to finally present us with their creation. Also, albums take a minute to sink in and I may like some songs more than I did before or will skip some in my second and third (and forth and tenth) listens. So, without further ado, these are my reactions to every song as it plays in my CD player (yes, I still have one of those! The nineties called but I hung up on those idiots):

1. Medellin. I have talked about Medellin before. It was the first track I heard from the album and I liked it. Of course, I'm biased but the whole "one, two, cha-cha-cha" is campy and fun and it made me laugh. It kinda put me in a trance (hehe). It's like a souped down cambia or a slowed-down reggaeton. It's Maluma's forte, so I see why they went with it. I like the overall vibe, and the way the song builds up is very... tropical? It's not the first time Madonna has sung in Spanish (La Isla Bonita, anyone?). I like the song best when she harmonizes with Maluma and the wordplay is fun and light and full of innuendo and sexy connotations. Of course. I guess you'd have to speak Spanish to really appreciate it, but overall is cool. I like it when she gets all confessional.

2. Dark Ballet. It starts very stripped down, and her voice is up there singing about life while a piano plays in the background. 'Cause your world is such a shame, cause your wold is... up in flames'. Then it kicks in and oh yeah. There's that piano while she talks about people wanting her to shut up. She delivers the message. Oh shit. Is that The Nutcracker? It is. Who knew? It's very experimental and dramatic. It swells and stops and it gives you a whole experience. It's a feeling more than a banger. It's not your typical Vogue Madonna. It's weird and incredible and I like it. It's full of vocoder and effects. It ends like when someone closes a door in your face when you're listening to a conversation someone is having in another room.

3. God Control. Madonna starts singing like she's got lockjaw. Really. It's a cool effect because it's singspeak and then a choir comes in. What. And then it's DISCO! Really. And gunshots. Damn. Madonna did a song about gun control with a disco beat. Very powerful. It's disco with a social message. "This is your wake up call" she sings. "God iconography". The USA is the country of God and Country. People have said that guns are god-given. Yep. So this song is powerful. Not everybody's cup of tea. But when has she been it?

4. Future. She sings this with Quavo. I had no idea who he was so I had to google him. The vibe is fantastic. Groovy and fun, it has a very Island feel to it. You can almost feel the waves at your feet while you dance barefoot in the sand. It's that fun. Very Jamaican, very tropical  and dancehall and fresh.  Madonna is giving us flavor while we think about the future. Nice.

5. Batuka. It starts like a pregon and the percussion is incredible. I have no idea how they did that but it's like tens of small drumsticks are hitting a taut surface. Very cool. Then the call-and-response starts. It's Madonna and a choir of children or women. It's also a 'message' song: we're gonna overcome the old man (Cheeto?). Very world-music, very culturally infused and intriguing. It sounds African and very syncretic, in some way, but the message is clear: things need to change. It's the quiet before the storm.

6. Killers who are partying. It's very Old World. The first sound is like a guitar, but it sounds antique, like it was performed in the XVII century. Yeah, I have weird referents, but that's what I felt. She sings extending the vowels and she sings about who she is in contrast with others. It's a collective call to the #metoo or to the #jesusischarlie (about the Charlie Hebdo tragedy). Carrying the burden of the less privileged. The chord instruments are beautiful and she says 'E mundo e selvagem, o caminho e solitario' so powerful. Liked this one. It also gives me Ray of Light vibes at times. Self-referential, thy name is Madonna.

7. Crave. Ohhh Madonna singspeaking is gold. A very different kind of sound for her. It sounds like pop but not quite. A souped-down reggaeton? I've heard a similar sound on the radio, but she's giving it her own personal spin. It's about wanting what we should not want. Or what we cannot have. Universal. I like the guitar and the percussion. I really like this one. It's the kind of song that gets under your skin. I have no idea who Swae Lee is so I google him. Madonna seems to have her finger on the pulse of everything. I'm going to try and get a mix of this song. Yep.

8. Crazy. Accordion? Oh, and a downbeat. Yes, Madonna and her catchy vibes. And you're not gonna do her wrong, boy. Yeah. Voce me poe tau louca. Voce pensa que eu so louca. Not today, Satan. Her Portuguese is so cute! It's a catchy, mid-beat song that makes you sway. I like this kind of song because I'd really like to slow dance with a certain somebody to this beat. Heh.

9. Come Alive. Ohhh drums! Mouth closed. I don't want your opinion. Yes. Nice beat and the orchestra goes in. This is one of those 'be yourself and fuck the haters' song. Nice. 'Lips closed, I don't want your opinion, Who you talking to?'. There's a choir here, too. Very uplifting. It has a very earthy vibe while at the same time it sounds very of 'today'. Madonna has always have the ability to translate what she's living at the moment into her art. I like that about her.

10. Extreme Occident. Piano again. And Madonna sings about finding herself. This is a woman who has traveled the whole world and it shows. And then more instruments that I don't recognize. Very World-sounding again, but it zig-zags with pop. " I wasn't lost, it was a different feeling". Wait. I've felt that. It's nice when someone puts music and words to your thoughts, no?

11. Faz Gostoso. Oh yeah. Give it to me, mama. Definitely Brazilian and tons of Portuguese. This is a banger. I'm planning on dancing the hell out of this song at the first try. I need to go to a club just to ask the DJ to play this. Safado and Gostoso are the most delicious words in Portuguese, IMHO. Safado is a very hot guy and Gustoso means literally that he's yummy. Faz Gustoso refers to the deliciousness that a man is. He's so hot and makes you feel soooo good you feel tempted to be unfaithful. Yep. Been there. Show me how you move your body. Ele faz tao gostoso!

12. Bitch I'm loca. Another one with Maluma. "Besame la boca". Oh yeah. Reggaeton, because that's Maluma's forte. And Madge sings most of her verses in Spanish. Fun, fun. Lots of double entendre like Bitch I'm loca - y yo, loco, loco. Very sexy and mid-tempo, sultry sound. I think her Spanish is actually very good. Really, for her to show what she's learned without boasting is really cool. And this song is fun and sexy. What else can you ask for? I'd dance the hell out of it.

13. I don't search, I find. Ohhhh this gives me Donna Summer's I Feel Love. Mystical, hypnotic, very house music sounding. Love it. Very nineties and self-referent. It reminds me of Erotica the album. Also Bedtime Stories. It's an amalgam of her dance sound. Madonna is at her best when she's on the dance floor and she knows it. This song should get more play. She's got some talking in it and I really like that. She's been talkative in this record again. She's whispered a lot, too. I dig it.

14. Looking for Mercy. Another mid-tempo. Introspective and melodic. There's violins, there's percussion. It mixes love and god, some of the underlying themes she's explored in the record and in other songs. Thematically, this record feels more like an embrace of all the cultures and countries and sounds she's encountered than appropriation. The beat is like a heartbeat and it's really nice.

15. I Rise. Oh, it starts with a voice saying the government thinks people don't understand how it works. It's got a nice beat and another social justice message. It's both uplifting and empowering. Isn't that funny that we could dance and also be socially aware? It's a nice song and I think it could be very inspiring.

Oh, are you still here? Awesome. So there. That's my take on this album. I'll have to listen to it three or twelve times until I find my favs and make a playlist. Fall is basically here so I'll blast the songs with the windows down while the weather is nice and will see what comes of it. I'll give it some time. Like Madge said, I don't search, I find.