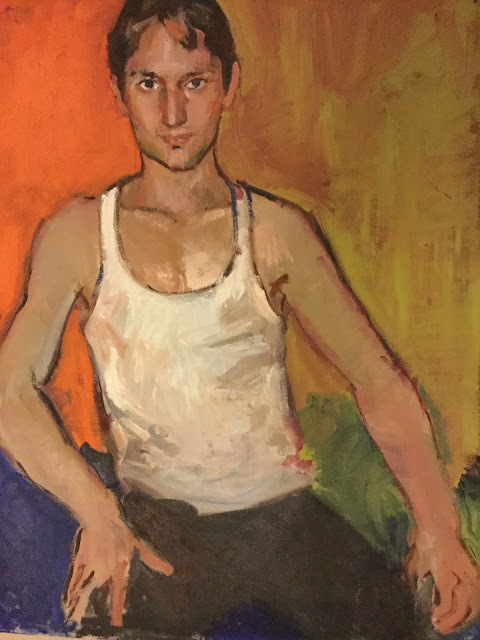 I don’t know who he is.  He’s been with me for eight years already and now that I’ve moved he’s come with me. According to the story I got when I got him, he's a Russian man and he came with a pear and a sleeping girl. The painter is a woman whose name I don't remember. It is in the back of the canvas, but I have never truly paid attention to it. I should, right? Given that I look at him every day, I should know where he comes from. I once commented to someone that I really liked this painting and I was told he looks like one of my exes. I was like, REALLY? And he may. Not like absolute likeness, but there may be an air to it that yes, looks like one of my exes.

I usually keep a good relationship with my exes. With some, at least for awhile. After all, I have cared deeply for them and they have been a part of my life for years (funny how all my serious relationships have lasted years, leaving little time to breathe in between them). We have laughed and we have cried and we have fucked and they have given me moments I will never forget, so they do stay with me. I think that deep down I'm just an irrepressible romantic, deep down underneath my cynicism and my at times blasé attitude, there's still a silly teenage boy who still believes in romance. I always tend to think that he, the man who is here right now, is Mr. Right. Maybe because I accept him warts and all. I have learned that you have to do that when you enter in any kind of relationship, especially romantic ones. No man is a project, the same way that no man is an island.

No man is a project and that's why we should not try to change them. They may present themselves at their best when you meet (after all, he wants you, so he'll try his best to impress you) but we have to know that everybody goes back to what one of my friends calls 'the base'. That is, no matter how great the sex, how often you go out, how attentive he seems, how much he tells you he loves you, he'll go back to who he really is: he'll say he loves you less often, he'll fuck you a little bit less, he'll be a little bit less attentive with time. He's still the man who gave you butterflies but he will go back to 'normal' with time. And that's part of life. Nobody lives in a constant state of euphoria. There'll be ups and downs. And we have to roll with them.

No man is an island. They all come with a series of concessions and situations that you'll have to accept because it's part of what Dan Savage calls the 'price of admission': the perfect man does not exist. Each and every one of the men who come to your life will have some things that you'll have to accept if you want him: I usually count three or four (no more, hopefully less) that I know I can live with in order to be with him even though I don't understand them or I don't really like them. Mr. Perfect does not exist, dahhleenk. We are not perfect. Why should we expect perfection in the man we want?

So those exes I was talking about. Yes, I have learned a lot about myself because of them. Yes, some of them are still around. Some have been gone for awhile. Some I don't want to see again. But they all stay with me. Because we learn from The people we love and care about  about life and about ourselves. We have to, in order to grow, I think. It's part of growing up. And no matter how much we loathe it, we all have to grow up, sooner or later.

And why, would you ask, I came to post about this painting now? Well, John at Going Gently has made one of his threads (he has some of the best 'give me your best.... threads) and he asked his readers to send him the picture of a painting that meant something to us and I sent him The Russian. And then I remember my exes. and then I posted this. Because that's how I roll.

Ella Fitzgerald - Wait Till You See Him (De Phazz Remix) from Lounge do Mar on Vimeo.