Asexuality isn’t a complex. It’s not a sickness. It’s not an automatic sign of trauma. It’s not a behaviour. It’s not the result of a decision. It’s not a chastity vow or an expression that we are ‘saving ourselves’. We aren’t by definition religious. We aren’t calling ourselves asexual as a statement of purity or moral superiority.

I was recently talking to someone and he told me he's discovered he's asexual. I was stunned. I don't think I've known anybody who identifies as asexual all my life. I was confused because he had told me he had been in relationships before and I had seen him being VERY friendly with another man. What was this, I wondered? For someone who really enjoys sex and thinks sex is part of any romantic relationship (and some that are just, well, sex), finding someone who told me sex was really not important was a realization.

You see, I started having sex when I was a teen. I explored sex with guys my age and with guys older than me. I went through many of the pitfalls many gay men go through : falling for straight boys who didn't want to fuck me, falling for straight boys who only wanted to fuck me, not paying attention to awesome guys who would have been good to me, paying attention to guys who were not good for me, falling for married bisexual men, falling for men in the closet, being the sex toy of three brothers in succession, fall for a father and then for his son, well, you get the idea. I have been around. And I have liked it.

So by the time I entered a serious relationship with a man, I had been infatuated with men multiple times, had had my heart broken once or twice and had been in sexual relationships with all kinds of men.  I have had fuck buddies, lovers and boyfriends, both my age and older and I have accumulated some experience concerning sex. But seex has always been there. And I had never really felt pressured to have sex with these men, mind you. So when this guy told me he discovered he was asexual and that he had been having sex with men because it was what he thought was expected of him, I was stunned. Having sex with someone without really wanting it is something I have never experienced. I have had sex with men BECAUSE I have really wanted them to wreck me.

And the funny thing is that I realized that yes, it is possible to be asexual and also feel the pressure to have sex even when we really don't feel it's something we want. Gay men are constantly bombarded with overtly sexualized images from the media and many times our success is tied to how sexually attractive we are and how much sex we have. Don't believe me? Just ask the owners of any hookup app and help them count their millions. Apparently, asexual people may also be inclined to have queer romantic relationships (even though some are aromantic, too) and pursue homosexual romantic relationships which include commitment and companionship but that reject conventional notions of romantic love. You could have knocked me out with a feather.

The thing is that I was just scratching the surface. For someone who enjoys sex very much and has had relationships that have tapered out sexually, meeting someone who did not feel sexual attraction was important was illuminating. Maybe I had not been aware of where those men with whom sex became less and important stood in the sexual spectrum? What if they had been semisexual, or demisexual? Yeah, those are terms that apply to people who are in that gray area between sexual and asexual, or who are capable of forming a romantic relationship with somebody (and have sex with them) when they feel a strong attraction.

I realized I have never thought about that. So maybe I have fallen for an asexual guy before? I have no idea. But it would be something worth explaining, don't you think? For us sexual people, the idea of an asexual relationship may seem daunting, but that's what open relationships are for, right? I wonder what it would be like to fall head over heels for a man who does not experience sexual attraction towards me but who loves me. Sounds contradictory, right? Maybe we should explore more the notion and be more aware that well, not everybody is like us.

P.S. here, a graphic that may be helpful. Or that may confuse you more (you may need to click on it): 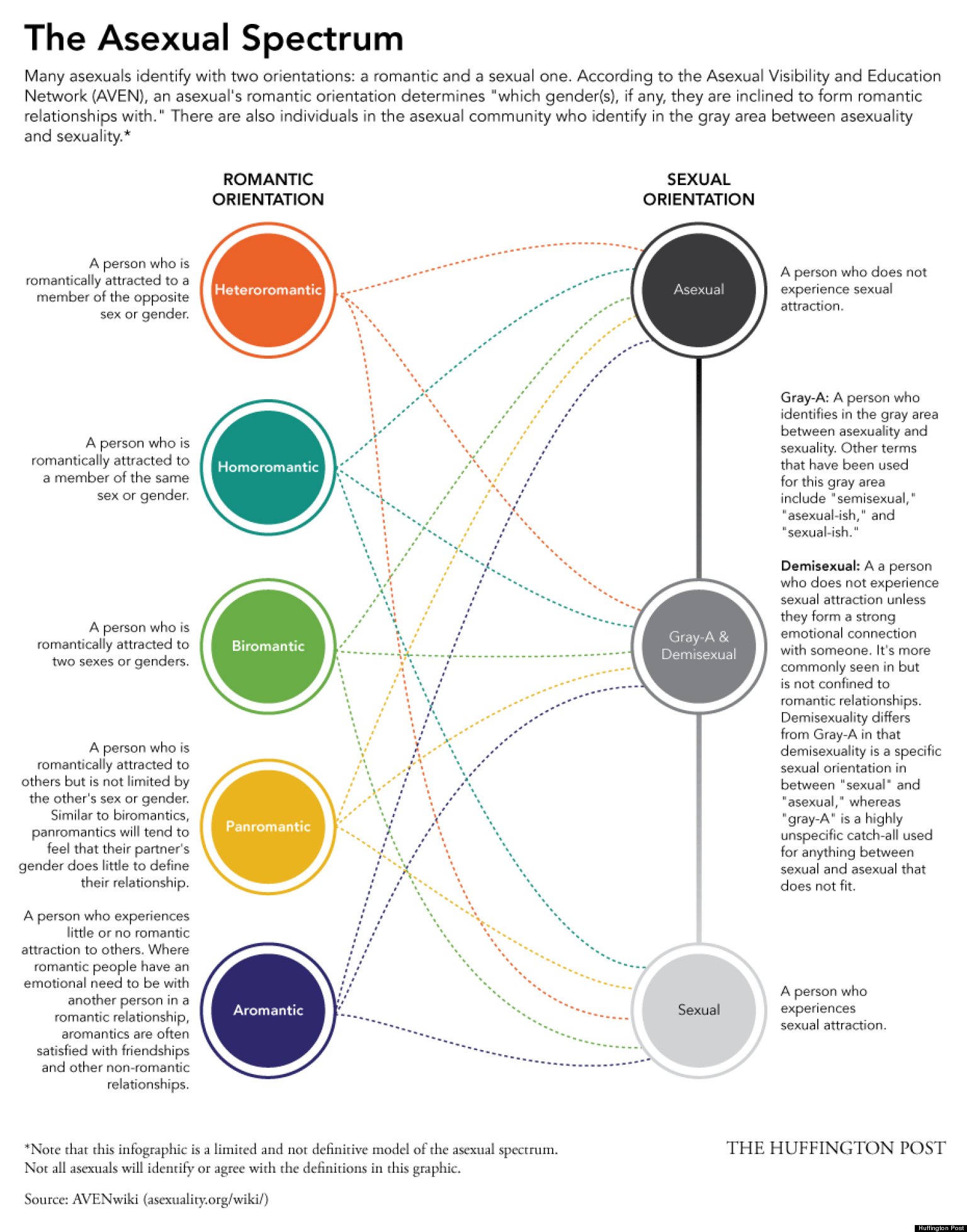