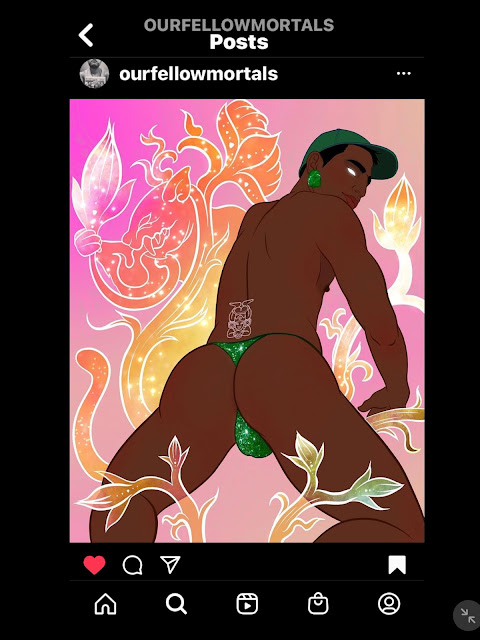 @OURFELLOWMORTALS
One of the things I miss about Tumblr is the art produced by queer artists. When I was in Tumblr (it seems it was ages ago now) I used to follow the most incredible artists. Artists that expressed queer desire without any restriction. It was refreshing to see a representation of the sex I was having (or wanted to have) and it was a joy to see how they flourished. 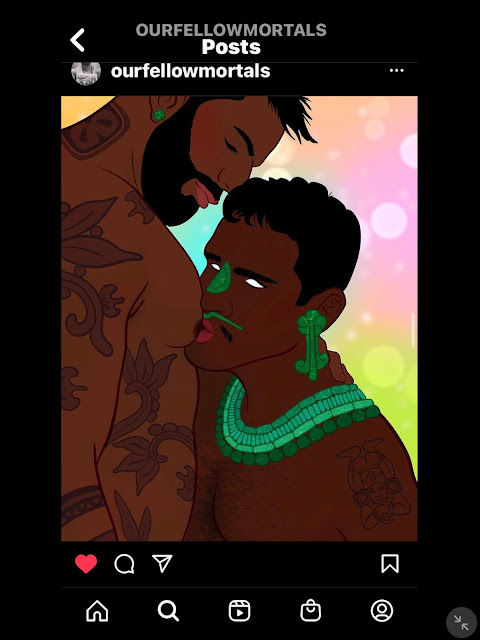 @OURFELLOWMORTALS
Then I think it was Yahoo that bought Tumblr and they decided to scrub it clean of anything erotica, in order to be able to bring more people in and sell more products. It's the Facebook model, darling: take anything that people use, make it appear like it's free and exploit it to death. It didn't work. Now Tumblr is a shell of what it used to be. And they deserve it. 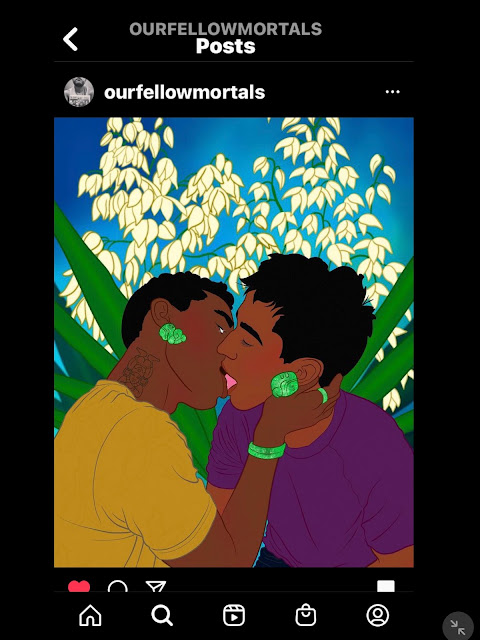 @OURFELLOWMORTALS
Many, many of those queer artists moved then to Instagram, another platform that allowed visual media to flourish to an extent and set shop there. Is not without problems, mind you. It's owned by Facebook, the monster that will eat the planet. Even though when you open it now it says it's from 'Meta', after the scandal they had where it was revealed Facebook sells your data, promotes white supremacists and basically helped the revitalization of hatred around the world. Just another day in corporate America. 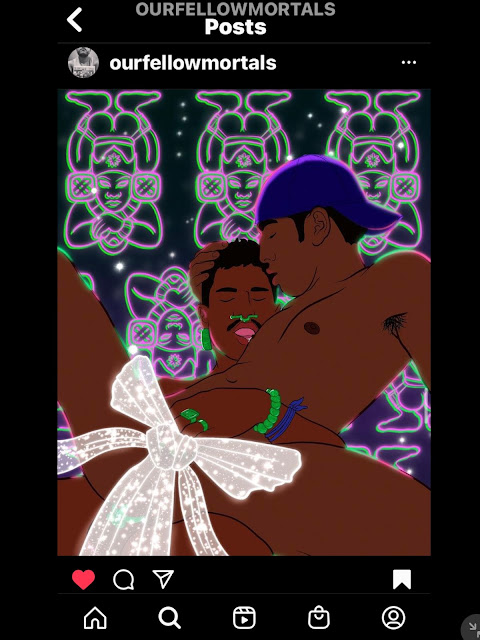 @OURFELLOWMORTLAS
But let's go back to the subject that brings me here today. I want to direct your attention to @OURFELLOWMORTALS, a visual artist who creates fantastic visions of love and lust that feel like you can almost touch them. The first time I saw one of his drawings, I could not stop gawking, so I decided he'd be the first artist I'd feature in this blog thingy here. 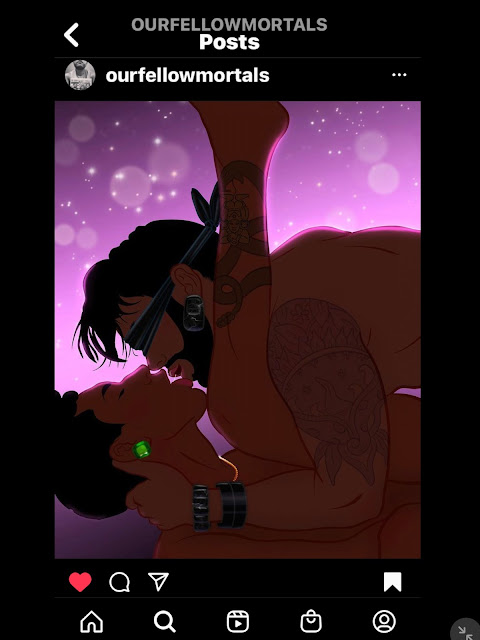 @OURFELLOWMORTALS
So here you have it: a small sample of the art produced by Jonathan Hemelberg, the person behind the name. I find his art to be incredibly sensual and visually stunning. I've been thinking about actually getting one of his t-shirts or stickers.
@OURFELLOWMORTALS 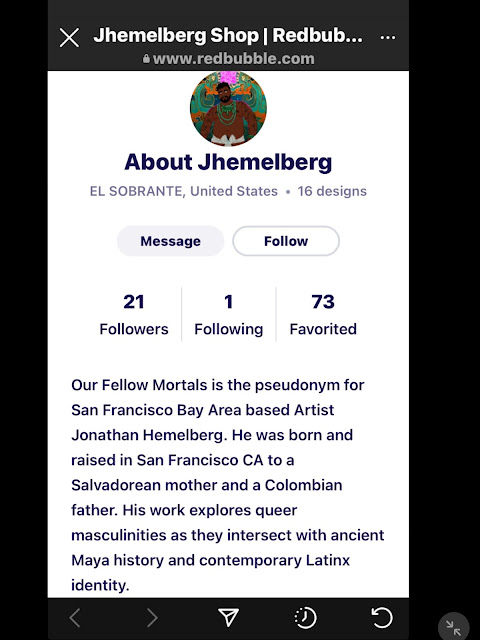 @OURFELLOWMORTALS
What I'd really want, though, would be to commission a full-size piece of art for my house. But that'll have to wait until I have some extra money. Meanwhile, I stalk him on Instagram (if you have an Insta account or a Facebook account, make sure you follow him, it's worth it) and I am forever fascinated by his art. 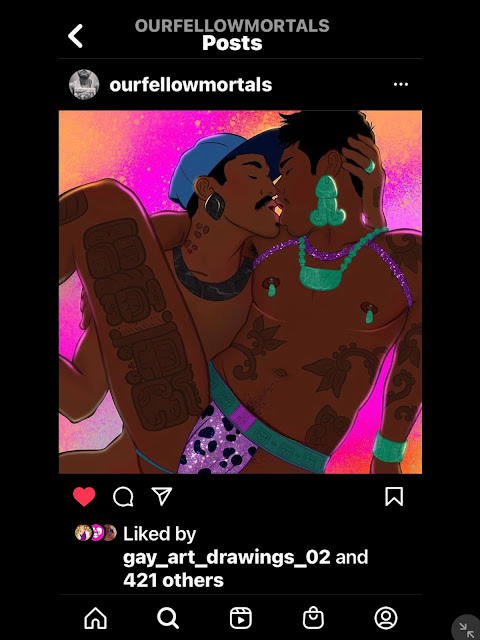 So go ahead. enjoy. And if you're like me, make one of his images your phone wallpaper. I'm sure it'll spark more than one conversation. And who knows, if you follow him on Instagram, you could be able to commission something and then you'll be able to show it to all of us.
XOXO 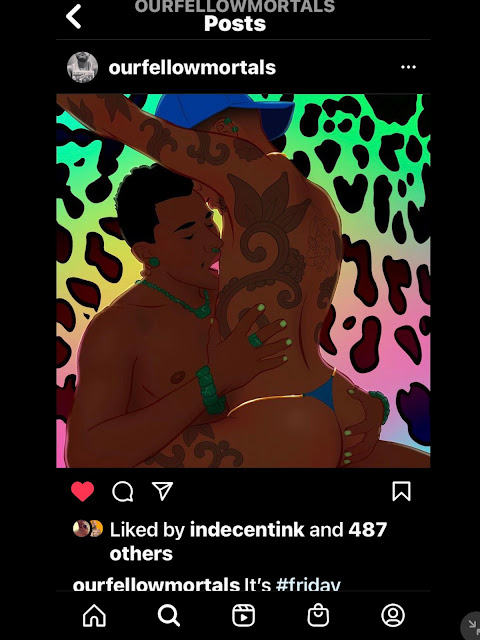 P.S. this next one was shared with me privately, because Instagram, being the bastard child of Facebook, is corroded with the same desire for expansion and greed that homogenization brings and it does not allow nudity. This, I think, is the essence of @OURFELLOWMORTALS’ sensuality: