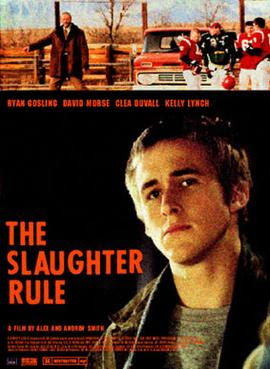 I have daddy issues. I guess I'm the first t accept it. I have always liked 'older' men. And that is something that has changed as I grow older. The daddy type I liked when I was 15 is not the same I like nowadays. I've come to appreciate daddy qualities in men who are even younger than I am.
I think it's more of a quality and personality issue than just the actual fact that the man LOOKS the daddy part. I do like what you'd call 'solid' bodies, though. But that has to do with what the man in question projects rather than the fullness (or muscularity) of his body. Take an example: I am watching this movie called 'The Slaughter Rule' -I fucking multitask all the time, so it's no news that I'm writing this, listening to Amy Winehouse and watching this movie for the third or fourth time- and observing one of those daddy-son interactions I have come to enjoy so much.
In the movie Ryan Gosling plays the younger football player to David Morse's (HUGE crush)older coach who brings the local football team in the middle of fucking nowhere to be something worth watching. Ryan, who becomes some kind of out-of-his-look high school semi-hero who redeems himself in the eyes of the townspeople through sports plays opposite him. Typical small-town fare. But the relationship between Ryan's character and David's gets really close. Too close for the younger man's comfort, though.
In this one scene, the coach takes the football player to his apartment (very common, very bachelor-like, with vinyl records' covers on the wall and all that) and cleans the younger man's wounds from a previous fight (he seems to get in fights the other way people make phone calls). It's all fine until they get to have some kind of mock-game and the coach tackles the younger man in a bear hug that becomes one of the most intimate and erotic scenes I've seen in the screen in a long time.
Both men are dressed in heavy winter clothes, but when the coach (gray-ish hair, gray-ish beard and the solid body that is going a little soft but that keeps the hardness of the ex-jock) asks the young man to make a pass at him the bodies officially do not touch. There is no skin-to-skin contact, except for their faces, that get to be really close, cheek to cheek. The younger man's clean-shaven face, his broken nose and black eye contrast with his red bee-stung lips stands with his face against the coach's rugged cheek.
When they collide in the middle of the cluttered living room, the man does not let the athlete go. What is so hot about this is not the actual bear hug, masculine and forceful, but the expression on the face of David Morse: it's longing, it's lust, it's sweetness, it's pain, it's the joy of the one moment that he allows himself just for a few minutes. Breathing Ryan in as oxygen. The younger man for a second seems to let himself go in the other's arms, while he talks in his ear. Until he reacts and sets himself free. Freaking out, of course.
Then the younger man goes on to play, always avoiding the coach, who obviously put him and the team on track again. But that's part of the whole story, that you would have to learn only if you go and watch the movie (which I recommend, by the way, a study of life in a small American town in the mainland). What touched me is that daddy-esque representation of what I have always had in my mind as a 'daddy'. It's the strength and the sweetness, the lust and the affection, the roughness and the care. That is what the daddy type brings to mind to me. Those few minutes between the two men have to me almost the power of the few minutes between Ennis DelMar and Jack Twist in that other movie.
That is what a daddy is for me. I don't do the whole leather harness shit (I find leather awesome as fashion statement, but it does not give me a boner at all) or the cigar and all that. It's what's behind that what makes my knees weak. It's the strength, the sweetness, the carnality of the man what makes me want to give in, to lose myself in his lust and care.
And those qualities do not have to be embodied by a fifty-year old leather-wearing, paunchy civil servant. It could be a twenty-five year old jean-clad college student. It's the essence what makes me hot. Still, I would not say no to David Morse, mind you.
Email Post