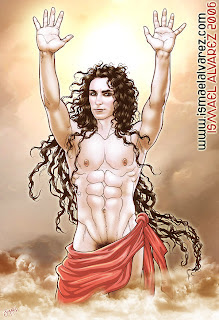 I was totally speechless when one of my friends asked me: "... so and what do you think about Dumbledore?". I was like.. 'What?'. I didn't know people were still talking about the last Harry Potter book. Had I missed something? As an avowed Potterhead, I felt left out.
It turns out that J.K. Rowling totally outed him in a talk at Carnegie Hall on the 19th. I was speechless not because I found out about venerable Dumbledore having an un unrequited passion for another man when he was younger, but because this would be a fantastic blow to millions of idiotic wingnuts who already think the Potter books are well, 'diabolical'.
I, myself am a total Potterhead. I became one right after I first grabbed the first book. It was a story that resonated: the boy who felt different, the boy who was mistreated by some people and who yearned for something better he knew was out there was.. me! I could have been reading about my life when I was like, thirteen. Ever since I tend to empathize with the underdog every time I'm reading or watching a story develop. And Harry was just... perfect! I kept reading only to find out that then he discovers that there are more people like him and goes on to become something we all dreamed of when we were younger (or at least I did): a wizard! Totally awesome. I guess that's what those crazy religious nuts cannot take: even without the clarification from Rowling, there was a sneaky subtext where being 'different' and finding 'our own' to realize we are 'not alone' is something those lemmings cannot take well.

I did not notice right away what the author was hinting at when I read the last book, though (the first time, because now I'm going to totally re-read the whole series, just for fun) and I just discovered a piece Rebecca Traister from Salon did on J.K. Rowlings outing Dumbledore and I can't wait to get my little paws on the books again and look for more clues:

But a close reading would reveal that "The Deathly Hallows" was shot through with intimations about the headmaster's sexuality, and not just in reference to his love for Grindelwald, which Rowling describes as a teenage passion that makes the otherwise responsible young wizard forget his family and go uncharacteristically batty. The book kicks off with an obituary by Dumbledore's school chum Elphias Doge, who describes his first meeting with the teenaged Dumbledore as a moment of "mutual attraction" and who later tells Harry that he knew the wizard "as well as anyone." Then there is the lurid language of a scurrilous postmortem biography of Dumbledore, in which writer Rita Skeeter wonders about the close relationship between the headmaster and his young pupil: "It's been called unhealthy, even sinister ... there is no question that Dumbledore took an unnatural interest in Potter." Here Rowling is aping the leering, speculative tone of news stories about gay priests, Cub Scout leaders, and teachers accused of inappropriate relationships with their charges.

When she gets to the Grindelwald relationship, Rowling is clear from the moment Harry spots a photo of young Dumbledore with a "handsome companion." In the shot, the boys are "laughing immoderately with their arms around each other's shoulders." A neighbor describes the relationship between Albus and Gellert: "The boys took to each other at once ... even after they'd spent all day in discussion -- both such brilliant young boys, they got on like a cauldron on fire -- I'd sometimes hear an owl tapping at Gellert's bedroom window, delivering a letter from Albus."

And then there is the publication of an original letter from Dumbledore to Grindelwald, in which the wizard chides his friend for getting kicked out of his foreign school, concluding, "But I do not complain, because if you had not been expelled, we would never have met." When Harry has a chance to chat with the deceased headmaster toward the end of the book, Dumbledore tells him his version of the story: "Then, of course, he came ... Grindelwald. You cannot imagine how his ideas caught me, Harry, inflamed me ... Did I know, in my heart of hearts, what Gellert Grindelwald was? I think I did, but I closed my eyes."

Isn't that brilliant? I love it when people find these subtexts and are able to extract meaning out of some apparently innocuous products of pop culture. Now what I'm looking for is for the movie adaptation of Phillip Pullman's "His Dark Materials" and see how the producers get out of the bashing the evil (Catholic) church gets in the books. I can't wait!!

Note: the awesome artwork is from Ismael Alvarez, in case you didn't notice the name...
Email Post