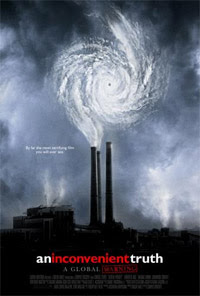 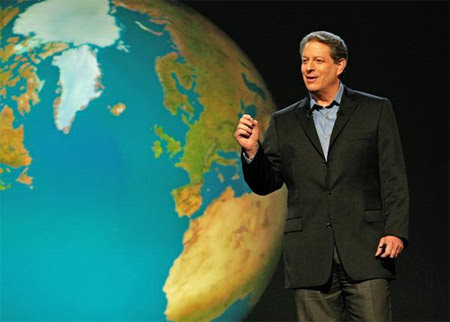 I find it incredibly funny that Al Gore, after having his presidential bid stolen from him by the many unscrupulous RepuGliCLOWNS who disenfranchised African Americans in Florida a few years ago, goes on to win the Nobel Prize for his efforts towards protecting the environment.
That, and the fact that the actual president, propelled to a second term by the pushing force of backstabbing, innuendo and plain calumny, is as dumb as a rock, a bully in the worst terms, and as self-entitled and sanctimonious as the nation he rules. Oh, yes, because it's the kingdom of little king George. Where he feels that his God talks to him, dispenses favours to those who favoured him at a certain point (the powerfully Machiavellian right-wing think-tanks) and has been changing the basic structure of the country one Supreme Court Justice at a time and re-establishing the reputation of the U.S. as indulgent, over-spending and the bully of the playground.
Not that I think that Al Gore is perfect. Far from that, but he comes across as intelligent, articulate and compassionate towards his people and others. Probably with high levels of emotional intelligence and critical thinking, something lacking in many of the ignorant bigots who voted for George W, and who could not identify with Gore in the popularity contest that is the U.S. presidential election.
So Gore wins the Nobel Prize and I think he somehow gets some retribution for his efforts to bring awareness to a nation (and the world, because we all know his power-point-cum-documentary has won several big prizes and that always makes people go see a movie, even if it's a documentary by an ex-vice-president) seeped in ignorance and self-righteousness. And I imagine that should feel good, no matter if a judge in Britain rules that there are nine 'inaccuracies' in the documentary and the blind evangelical idiots who consider it 'leftist propaganda' are crying victory.

I think that in general, some Americans may look back and compare and contrast Gore and George W. and possibly think before they elect the next president in 2008. Most, nevertheless, will just turn around and blame that Nobel Prize (if they know what that is) as more leftist propaganda and go on to elbow and trick into the presidency the most idiotic, homogenized and bland of the RepuGliCLOWNS as their new president. Poor delusional Americans. Trying to preserve a family-values-touting, religiously-drenched-preaching, squeaky-clean image that exists only in their lobotomized-by-dogma minds.
Email Post