Let's hear it about the boy 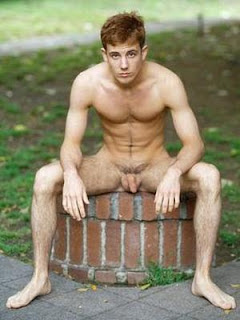 I give up.
Remember I was trying to keep my libido under control? Well, I just went back to my old tricks. I have had my eye(s) on this cute guy that hangs around with some of my friends and that is one of those 'allies'. That is, he's one of the guys that everybody suspects is straight but hangs out with bunches of baby dykes and gay boys.
Let's call him C. He is in many gay-populated get-togethers, has explored gay bars with us and is very cool around all our madness. He is also pretty smart (studying one of those majors where you have to bury yourself under tons of books and complete crazy assignments that require you to THINK -in capital letters- so go figure). He may be considered nerdy by some (yum!) and he's not really all that magazine-perfect (see previous blog entry) yet I think he's hot.
Add to the hotness that I have the sneaky suspicion that he's a virgin (and he's over twenty, mind you), he once was next to me filling out a silly survey about sexual proclivities (don't ask) and I read over his shoulder (I know, I shouldn't have but it was fun) that he has 'no experience' in sexual matter. Oh and did I mention that he's one of those ' good Christian boys' who go to church and belong to all those churchy and bland organizations? If you know me, you know that I truly believe that all fundies are despicable and that religion is an unnecessary evil some people have to deal with, so go and try to figure out my attraction to this guy.
But still, I think he's adorable. He smiles and his face lights up. He finds my scandalous remarks funny (I say 'fuck' in the same sentence I say 'church') and he's not adverse to let himself be slightly manhandled (I'm very 'touchy' with men I like). He also gives all those 'mixed signals' that we gay men so very frequently get from those 'undecided' guys who may or may not like to get it on with us.
Shake well and serve cold.
That in a nutshell is my new quasi-infatuation. I think that all is due to the fact that I find intelligence and kindness erotic. Right. Because I know that a guy like that will figure out all my buttons and then push them all. At the right time. And that nice guys always end last (allowing you to come while they fuck you) and that being a virgin I could totally mold him to please me (have done that once or twice to astounding results). Also, that he seems to have the nicest pair of hands this side of Indiana Jones, he's on the slim side with a hard body (I've felt his tummy, you silly!) tall (tall men are hot and anybody over 5'7" is taller than me); on the 'young' side of me (I've told him I've sworn off chicken) and has that aw-shucks-Clark-Kent demeanor that drives my hormones CRAZY! I feel like I want to jump shy, tall, nice guys bones really badly.
I think I'll refrain and will not actively look for his companionship and will try to always see him with seven million people around so I don't give in to my inner devil and end up making out with him in a corner. Still, that may be a good idea...
Email Post
Labels: boys crushes