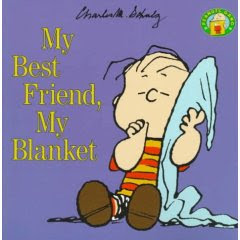 We created an 'emergency kit' in therapy. I thought it was cool. I like doing projects and things like that. I am good at what people call 'learning by doing' (maybe that's why I have learned most things in life the hard way, but who cares) and I thought it was pretty cool. The lady who lead that one session asked us not to spend money on it, but use things we already had. I decided to take it to Target and get part of the things I needed there. And I discovered that I went for all things vanilla. Go figure.The therapist said it was a soothing smell and you are supposed to engage all your senses (smell, taste, touch and hearing) when you're having 'a moment' (i.e. you're freaking out and you cannot think at all) which I thought was logical. When I put myself on 'a state', as the Brits say, I tend to get tunnel vision (cannot see beyond my despair or anger) and my emotions hijack me. So the idea of a kit made sense.

So I put in two pictures, for the visual aspect of it. One is of the two of us kissing and the other one is a picture of some orchids my friend Mickey took at Pipp's Conservatory in Pittsburgh and that he sent me years ago. Both those pictures talk about my relationship and about affection. And I included a card Boo wrote to me before he left this Summer. It was an awesome gesture from him and I was pleasantly surprised when I found it. I kept it on the night table until I put it in the kit yesterday. I love that card. I also included some vanilla candles (vanilla is soothing and I will need that) for the visual (you concentrate on the flame) and also because of the aroma.

I got the candles at Target. It was actually relaxing and entertaining to look for them because I had not bought anything for me (just for pleasure) in awhile (it seems this is one of those 'depression' flags) so it was good. I also got vanilla incense and vanilla hand lotion for the olfactory. Told you there was vanilla overkill all the way. For the touch, I am using one of those rubber/plastic blobs I got at one of those Pride festivals last year and that people usually use to crunch in their hands to 'relieve stress' (how appropriate) and a stuffed bunny Boo gave me awhile ago. I love those bunnies he gives me. That's why I included this one in my kit.

I also put two CDs to listen to when the freakout takes place. I don't know if I will be able to actually look for the CDs and play them, but the act of putting it all together is like a safety blanket. Think that kid in Peanuts who drags his blanket everywhere. That's right. I guess that's the idea behind all this. Besides the mindfulness of actually going and doing something to help you through the shit, of course. Just in case, I also got some stress relievers I found in one of those Natural Foods Stores and that are homeopathic. A little extra help is always good.

I was somehow surprised at my choice of objects. They all relate to my relationship: the pictures, the card, the bunny, (the first thought on CDs were a Chakras CD I have in my office and 'A Night in with Boy George' an awesome CD of trip hop and chillout music Boo gave me) and to my sense of smell. Maybe I should follow my instinct and resort to those things to comfort me when I freak out because those are the things I find more soothing? Who knows? And I hope the hard candy and the chocolate I put there come handy too (for the taste of both and the feeling-good effect of chocolate) and I remember those are there. There's no way of predicting what I'm going to do when I get really gloomy these days.

But what happened in therapy is interesting and it is that only three people in my group (we're 11, I think) actually brought the kit to therapy: one was my the girl who is blind now because of the suicide attempt (and she made an AWESOME origami elephant with a dollar bill that I immediately put in my kit) , one was one of the older gentlemen (the one going through a painful divorce) and me. Oh, and the guy addicted to painkillers talked about the one he put together (he didn't bring it because he did not know he was actually attend the meeting due to a previous appointment). But it was surprising that not more people actively did something to create their 'survival kit' and I wonder if that has to do with their level of depression or their desire to actually kick it to the curb. Apparently I may have a strong desire to survive, not to mention an urge to buy shit in department stores.

It was fun watching people looking at parts of me going around and asking questions and it made me think about why I chose those things and that I am actually feeling a little better after all this shit. Oh, the apprehension is still alive and kicking and I'm still terrified of the mail carrier and fret with knots in my stomach every time I open the mailbox. But I'm trying to live in the present only, not to worry -too much- about the future and stop my rumination. One of the traits I have discovered is my tendency to go over and over the same shit over which I have no power at all and that make me double in emotional pain and crawl to a corner to rock back and forth while I bang my head against the wall. You get the picture, right?

So I am working on my 'mindfulness', even if still I have to drive back home because I keep forgetting if I locked the front door, even if I have locked myself out of my car and even if and I'm still horribly anxious before and while I go to the mailbox, petrified by the desire to know and the fear of getting bad news in the mail and because I still catch myself thinking about the 'what ifs' and 'should haves' I am so prone to ruminate about. But I'm a little better. And I think the idea of Boo coming back in two weeks and the not having received any news from those assholes and the safety net of therapy are things that are kind of comforting. Whatever it is, it's kind of letting me breathe better. And that's a good thing. Isn't it, Martha?
Email Post
Labels: stuff survival therapy