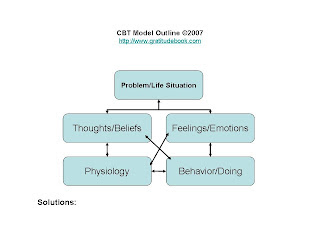 So I've been going to therapy. Cognitive therapy, as our shrink calls it.
I have been going to group therapy for two and a half weeks. Two weeks, altogether, with some missing spots here and there because I had to travel out of town and could not attend. It helps tons, this kind of thing. It helps when you tell your secrets, lies and fears to a group of people who are sometimes in a more dire position in life than you'll ever be. And you learn that life can really fuck you up. Really.

Be it because misery loves company or because when you are a tormented soul the company of other tormented souls seems natural, being an outpatient in the 'behavioral' -psychiatric- wing of a hospital with the name of a saint does have its perks. I have been babbling about my problems (real and imagined) to people for awhile now and I can't believe how close you feel to these people you had never seen before in your life. At least not before the day you stepped into the hospital lobby and asked for directions to get to your shrink's office. It may be the knowledge that after four weeks of terrible intimacy (it's even more intimate when someone hears your innermost thoughts come out of your mind than when you are standing there stepping out of your underwear) you know you won't see them anymore. That is, if you don't try to off yourself or off somebody else in a rage or go back to painkillers, or... oh well. You get my drift. And with this group, anything could happen. And it has.

You see, there is a motley crew of characters (and personality disorders) in my group. Lots of suicidal types and bipolars (well, duh!) and also people for anger management and addiction to painkillers and even alcoholics, for awhile. This lady used to be in our group for some sessions but was moved to the alcoholics' group. She said last time I saw her that she's cool with it now. She was afraid she was going to be the only female in the group, but has adapted. Hopefully, she'll find a sponsor and won't go back to binge drinking and blacking out. But seriously, her problems with the bottle were a little bit mild compared to some of the shit going on in our group.

Oh well. So my group. The average age may be thirty. That because we are between twenty five and about sixty (and I'm lousy with math). Men and women. We are there for everything from attempted suicide involving blindness or charcoal in your stomach as side effect; to deep depression, the kind when you don't even look at people and barely talk in sessions; to a manic depressive grandmother with money problems to a lisping, overweight 'hood bully walking with a cane; to a dude who never watches tv but is hooked on painkillers; to yours truly.

We are all fucked up. But the sessions are helping us. Just a little in some cases, but I think we're making some progress. Baby steps. But I have opened up to these people about my life and they may know more about me than people who had known me for years and years. Funny, isn't it? That life would bring you to a point where you blurt out your life and worries to strangers and that helps you realize that people close to you do not know you from Adam. Sad, too. And I will do something about it. As soon as I can, because now I don't trust time anymore. Not at all. And I don't want to run out of it.
Email Post
Labels: confessions fucked up people therapy