You wanna rumble in my jungle? 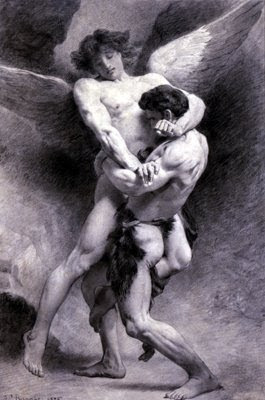 I am going through one of those 'dry spells', one of those times during which you really do not feel the pull of the physical. I am not motivated to get frisky. I do still look at butch handsome things. But the fire is missing. I'm in lust remission. And most of the times I wonder if I'll get my Mojo back again.
You see, even before the depression episode,my mojo was somehow fucked up. In order to function properly, I need to feel that the other guy is as into me as I am into him. And that has not been the case for a long time. I believe I am weird: I cannot have sex for the sex of it. I really need to 'get in the mood' and 'be into it' to actually get things started. Kind of what the usual perception of women is: they need tons of foreplay and romance in order to get in 'the mood' to give it up.
I have caught myself looking with envy at all those men showing their wares online and covet their ability to whip it out and get it on with whomever (boyfriends, lovers, strangers) whenever (morning, day, night) and wherever (home, shopping centers, restrooms and parks) tickles their fancy. LIterally. It just seems to come effortless to the other 99% of the gay (and straight) male population of the world. But not for me. At least not anymore. I used to, when I was 16, though... Am I becoming more selective? Is it better taste or just plain ennui?
I guess I am not anymore into casual sex and booty calls. Or quick dalliances. Or inconsequential shags with semi-strangers in slightly public places. I I have found myself looking with growing astonishment to how somebody can make booty call after booty call until he gets someone to go to his house and have sex with him. I am beside myself with awe when I see someone whipping out his dick in a public toilet for other man to suck. I find incredibly daring that someone would actually get it on with some anonymous guy just because he's horny. And tape it and put it online. I have found myself unable to do that.
I think I've failed my test as a grown gay man. Even as a man. Most men seem to live in function of getting some nookie. Some ass, some dick. Sex seems to be their raison d'etre and they seem focused on getting it on with no matter who no matter how. And apparently they usually do it. That I think I envy.
I usually read the exploits of other bloggers who seem to have the most incredible sex life (fucking totally hot men several times a week and enjoying themselves thoroughly while they do it and then writing about it). I cannot do that. I have found myself limited by myself. You see, I have discovered that cannot relax unless I totally trust the man I'm with and if I don't trust him, no clothes are coming off. Never mind sucking his dick or letting him put it in. I cannot seem to get excited unless I perceive that said man is into me, if there is not that electricity you feel when there is real attraction, I'd rather read a book. Erotica, if I'm in the mood. And I cannot definitely have sex if I get weird vibes from the dude who's about to bone me. I'm automatically done. Nada. No blood rushing though my lower body. Noting. I'm left cold. And he could be as hot as hell and have nine inches ready for me. I'm gone.
So right now I am wondering if I am going though some kind of gayness mini-crisis or if it's something more serious. I wonder if I will ever just automatically will become again a sex machine, a superfreak, or at least a version of who I was or a version of one of those gay men I seem to find everywhere around me, all sex all the time. And what if this is it? Because I am having doubts and I'm wondering if I'm going to keep living vicariously through circuitry in this world of ones and zeroes, living in my head, a slave to and by my own hand. And then I'll guess I'll have to take the sexual out of the homo out of lack of practice with another man. Now, that would be ironic, don't you think, Alanis?
Email Post
Labels: gay men life Mojo sex