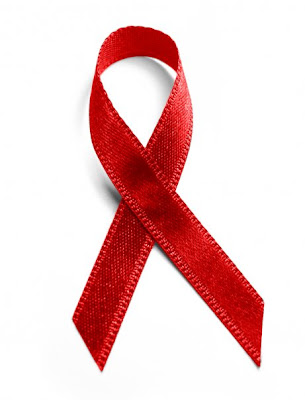 Today, more than ten years after on my best friends first told me that he was HIV positive, AIDS keeps claiming victims and even though it is not the scourge it once has, it keeps claiming the lives of men -and women- all around the world. This post is to remember everybody that there is still not cure for AIDS, that all the drug cocktails will not stop people from dying a terrible death and that the only thing we can do is prevent it. We all have to keep getting the message out there that the only way to contain the epidemic is to educate ourselves and educate others.
And even though it is not used -too much, anyway- for the religious right as a weapon of mass destruction, it is still shrouded in myth and misinformation. Here, some of the most common, as presented by Gabriel Rotello:

1- Myth : The epidemic occurred primarily because HIV is a new disease in humans, one that crossed from simians to people very recently and found a hospitable niche.

In fact, while HIV clearly evolved from a simian virus, it appears to have existed in humans for at least several decades before the epidemic began in the late seventies. It may even have occurred, though rarely, for centuries...........

2- Myth: It was essentially an accident that the epidemic struck gay men.

In fact HIV is extremely selective and only produces epidemics when a population's behavior provides it with a niche. Without favorable conditions, HIV cannot spread in a given population. Sexual behavior among gay men in the seventies, was extraordinarily conducive to the transmission of HIV...........

3-Myth: These kinds of behavioral explanations cannot really explain why AIDS hit gay men when it did, because gay men have always behaved essentially the same.

4- Myth: It is homophobic to implicate aspects of gay behavior in the epidemic because straight people behave essentially the same.

In fact, HIV will soon sweep the heterosexual population in the U.S. the same way it swept through gay men. In fact, thirty years after HIV began its relentless decimation of the gay population, it remains largely confined to the same heterosexual groups it infected from the start: hemophiliacs, intravenous drug users, and their female sexual partners and children.......

5- Myth: While the above might be true here in the developed world, HIV is a heterosexual disease in the rest of the world, proving that gay behavior is irrelevant.

In fact, HIV is spreading in an extremely selective way in the wider world, causing disastrous epidemics in places where heterosexual ecology favors its spread, and causing no epidemic at all in places where heterosexual behavior is less conducive. AIDS is an ecological epidemic that exploits certain behaviors, chief among them the practice of having large numbers of partners, straight or gay.

In fact, the condom code does not seem ever to have been very successful in containing the epidemic. The drop in new infections in the mid eighties, for example, probably occurred because most of the susceptible gay men were already infected. Now that a new generation of susceptible young men have entered the gay world, they are getting infected at rates that indicate that about half will eventually get AIDS, which is about the same ratio as in the older generation. The fact is that most people do not seem able to use condoms consistently enough to stem the epidemic.

Finally, the most potentially dangerous myth of all.