If the shooter fits... 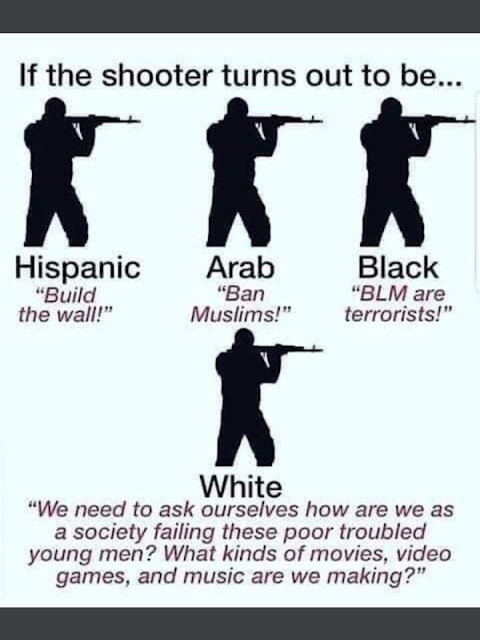 Republicans will ignore the white supremacy manifesto of the El Paso shooter and will blame video games and mental illness for the shootings.

But some democratic presidential candidates are not staying silent. And they should NOT be.


Jake Tapper: Do you think President Trump is a white nationalist?

“Let’s be very clear about what is causing this and who the president is—he is an open, avowed racist and is encouraging more racism in this country.”


2020 presidential candidate Pete Buttigieg on the latest mass shootings: “Every time this happens we say never again. We say we're going to do something. We say it's going to change and it hasn't. … I’m wondering what it will take to get the sense of urgency...” #CNNSOTU pic.twitter.com/u6a1QuLoCi
— State of the Union (@CNNSotu) August 4, 2019

Cory Booker on latest mass shootings: “I think at the end of the day, especially because this was the white supremacist manifesto… that Donald Trump is responsible for this. He is responsible because he is stoking fears and hatred and bigotry.” #CNNSOTU pic.twitter.com/k8LBA5SJi2
— State of the Union (@CNNSotu) August 4, 2019

Kamala Harris on gun legislation following the latest mass shootings: “We are not without hope on this issue, we’re without action.” #CNNSOTU pic.twitter.com/v0peKOo7s9
— State of the Union (@CNNSotu) August 4, 2019

2020 presidential candidate Julián Castro on President Trump during the latest mass shootings: "There is no question that this President is setting a tone of division and fanning the flames of bigotry and hate.” #CNNSOTU pic.twitter.com/EPxsqj40AE
— State of the Union (@CNNSotu) August 4, 2019

Bernie Sanders agrees with Beto O’Rourke calling President Trump a white nationalist: “I do. It gives me no pleasure to say this” #CNNSOTU pic.twitter.com/6mEwDtRyRM
— CNN Politics (@CNNPolitics) August 4, 2019

"Well, the white nationalists think he's a white nationalist. And that's the crux of the problem. They support him."
"You cannot not connect the president of the United States and his rhetoric," Ryan said. "I read (the shooter's alleged) manifesto this morning a couple of times and the language in there is so similar to the kind of language that you hear at a Trump rally, you see in his tweets."

In order to change the system citizens must act.

Join your local MARCH4OURLIVES, Call your representative and ask them to act on gun control . Vote the NRA paid and bought Repugs out of office. DO SOMETHING.