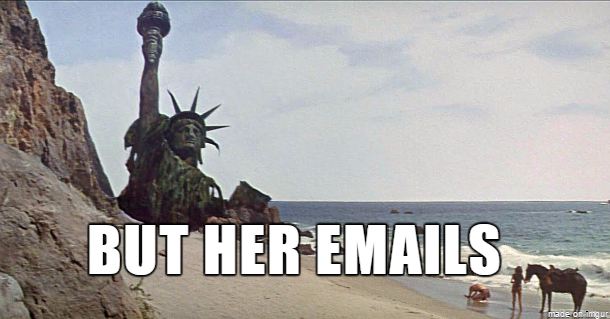 A not-so-subtle way to change the subject when you are about to be faced with being wrong about something. This is a reference to overlooking many many many problems with donald trump Twitler due to the single issue of Hillary Clinton's private email server, and using that reason as both a reason and defense for voting for him. This is currently used by trump voters any time any legitimate fault is found of Mr. trump Hair Furor.

So Hillary Clinton is back in the news (not like Cheeto or the trumpanzees let her out of for long, mind you). Apparently, it was found that there was no 'systemic classified violation in Hillary Clinton server emails', and therefore debunking -once again- the narrative that Clinton put in danger national security. A rumor that most likely costed her the presidency, when it was augmented and propagated by Russian trolls. A bittersweet victory of sorts.

And talking about Russian trolls, Hillary did drop a bomb that made me cackle in front of my computer: Hillary suggested in the Campaign HQ podcast that a Democratic candidate could be backed by Russia as a Third Party candidate. That SHE could be backed as a Third Party candidate. And all roads pointed to the smarmy Tulsi Gabbard. And si went for it hook, line and sinker, immediately issuing a revoke and going on Tucker Carlson to whine about it. Because nothing spells 'innocent' like going on a White Supremacist's program on Fox News to debunk something that has been kind of common knowledge.


So Tulsi was apoplectic. And I thought that even though some think Hillary propped her up, I think that she basically moved ahead of Tulsi and cut her next step: running as an independent and becoming Jill Stein 2.0. And talking about Jill Stein, Hillary did say that dear Jill was a Russian asset. Clear and loud. And I cackled again. You go, Hill. She was scorching the earth. Of course, dear Jill (may she forever be remembered as a fluke) issued an outraged statement and kept the recount money. Nothing to see there. I have always thought that Jill was planted there to fuck up the elections. And she did. Cheeto is in power but the sheer stupidity of Americans, who thought, in their collective sense of entitlement and privilege, that no foreign enemy could ever interfere in their electoral process. It's kind of simple.

Oh, but Tulsi. I despise her with the strength of ten thousand suns. I don't give a fuck she was in the armed forces. There are some truly despicable people who have served in the military. Tulsi is more of a Republican than most of the Republicans who ran for president against Twitler. She's an Assad apologist and a homophobe. She's also a supporter of Hindu Nationalism and chummy with Hair Furor (who defended her against Hillary's suggestion). Need I say more?

But what I really can't with her is that she is a homophobe. Yep, I keep my priorities straight. I do think that Tulsi has been popped up by Russian bots and trolls and I can see how she's a Hindu Nationalist a cult member and also an Assad apologist. But her being a fucking homophobe is the icing on the cake:

Her ideology stems from her life long involvement with the cult “Science of Identity” #ChrisButler
— 🏳️‍🌈Lisa Talmadge 🔥🏳️‍🌈 (@LisaTalmadge) January 12, 2019

It actually makes sense that she's a homophobe. As a minority, she probably tries to prop herself up by looking for shady alliances, belonging to fringe groups and oppressing the oppressed. Nothing new here. But I'm really laughing at how Hillary took a swift swing and basically kneecapped two of the most disgusting female politicians to rear their coiffed heads in the last years: Tulsi and Jill. Coincidentally, both Russian assets.

And we keep moving on. At the breakneck speed that news hit us, there's little time to actually catch our breath and think about 2020, that is basically around the corner. I think that there is no time for complacency or dwelling on any kind of 'differences' between the frontrunners (apparently Pete is 'surging' yay Pete!) and Warren is ahead of Bernie. So keep your eyes peeled and make sure you are ready for 2020. Because it's going to get uglier.