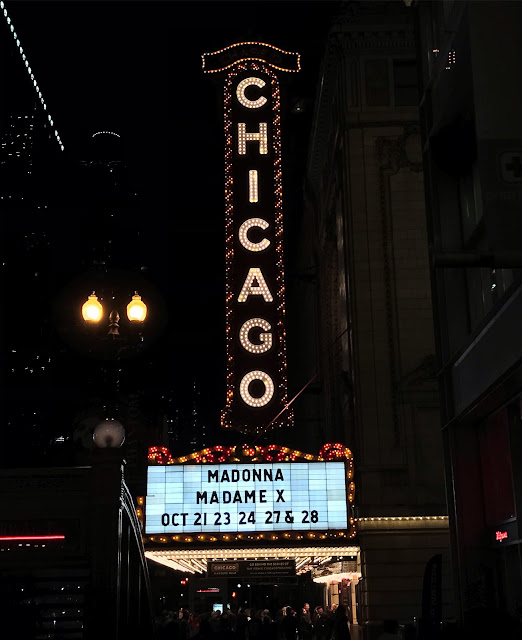 I went to see Madonna. It all came to be thanks to a broken heart: my friend Brian had bought a ticket  for his then boyfriend to go see Madonna in Chicago. Then the boyfriend flaked out on both the relationship and the concert and I was the beneficiary. Things happen. And you know that I was not going to say 'no' to an opportunity like this, right?

So the ex-boyfriend being out of the picture, Bri offered me the ticket and I immediately said yes. I have seen Madonna before. This would be my fourth concert. I had always seen her in big venues and this being touted as a 'theater tour' really got me curious. I had always seen her from far, from the nosebleed seats, dancing and screaming my little gay heart out to all of her songs and marveling at the show(wo)manship in display.

I have always thought her tours/shows are meticulously planned events where every single detail (from the choreography to her hair) is painstakingly rehearsed and art directed. And this was not an exception. I have to say that I was not disappointed. It was all I was expecting and more. 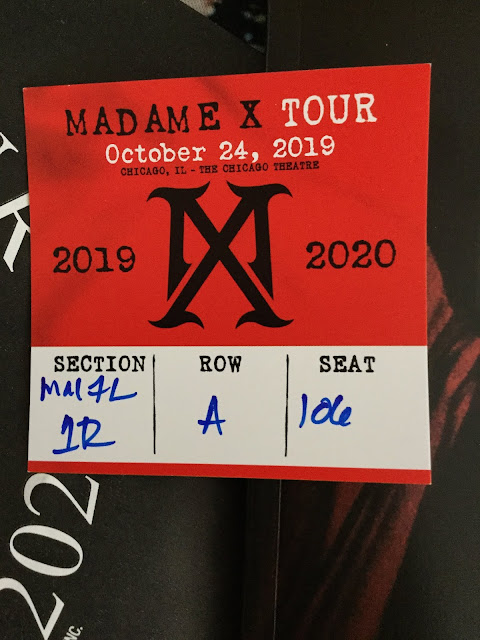 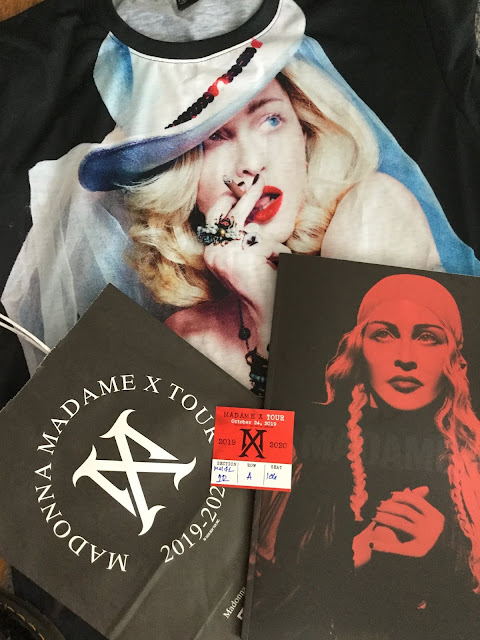 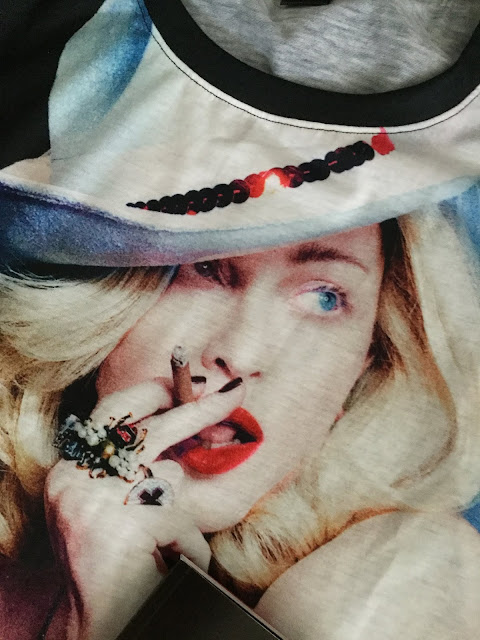 This is not going to be a review of the show. If you want the tea, head out to BoyCulture and read an expert's opinion full of spoilers. This is going to be mostly an account of my experience with actually seeing one of my idols absolutely close and personal for the first time ever. I think what shocked me most was that I was so fucking close to the stage. For the first time, I was seeing and hearing Madonna while standing (I danced to most of the numbers) within basically a hundred feet from where she was writhing and dancing and camping it up to high heavens. I could see her facial expressions. I could almost see that famous skin (when she takes a Polaroid of herself she offers it to someone in the public and the person who won it was a dermatologist and she told Madge her skin was FLAWLESS) and the details of all the costumes worn by her and her dancers. I was in awe. Really.

One thing is to go see an artist you like and another being able to finally nail down the humanity of that artist. With this concert series, I think Madonna is connecting to her fans in a way that one of the most famous performers in the world has seldom done: human to human. I know, I know, some people say she's not human. But let me tell you: this time she is silencing those snarky critics: she's 100% human when on that stage and the connection is so strong that I left the theater in a state of mild awe. Like when you have a pot edible for the first time and you feel like a three-second delay on everything that's happening around you. After listening to her music for years and reading books and articles about her, at last I had my own idea of what it was to be so close to an artist you admire: I experienced the Madonna phenomenon up close and personal. And I liked it. 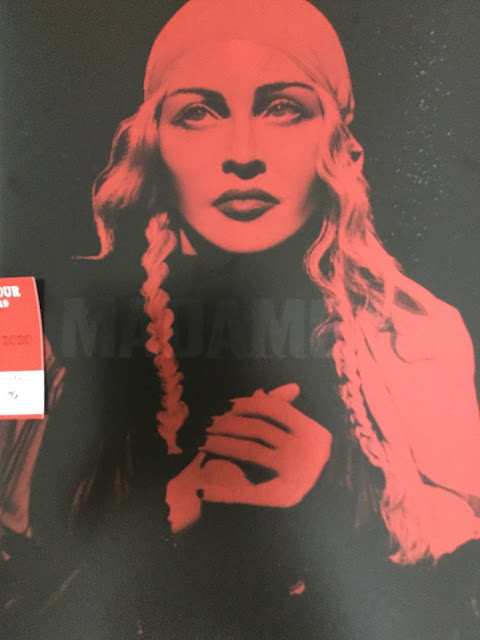 The whole event is an attack on the senses: from the music (I did not see a band this time, as she's had in previous arena tours) that made me dance the whole night (the show was set for eight thirty but she started at ten forty, more or less) to the costumes to the choreography to the stage. It was easy to focus on this because nobody had their phones. They put your phone in phone jail for the duration of the concert and I have to tell you: it was an experience. For three hours (!!) Madonna had all of our attention and it was worth every second. I was present (like she said I was going to be) and I really liked it. I remembered what it was not to have a phone attached to my hand almost every minute of a concert. I really enjoyed the experience and I'm going to try and do that more often. It's very tempting to create mementos out of the things we find pleasurable, but being really THERE when they happen is also very rewarding. I enjoyed every note she sang (she was in good shape, her voice loud and clear) and laughed at every 'I'll be here all night' when she told her jokes and when she was all self-deprecating (well, as self- deprecating as Madonna can be).

It was more like a play-cum-art installation-cum-concert event than the arena concerts she got me used to experiencing with her. It was both more organic and more articulated like a narrative than her other concerts (that also have a theme, mind you) and it worked more like a play, with the projections and the moving stage props than an arena show. I have to say that I enjoyed myself thoroughly. The three hours passed in a blink (when you're having fun and all that) and when it was over I was in a Madonna high for a long time. I even texted bae in the middle of the night and I sent him some of these photos I'm posting here.

I think what stuck with me more than anything this time were two things: her electric personality (I suddenly understood the words 'star power' clearly) and one of her performances (Frozen, sung behind an almost transparent screen where a her daughter Lola flawlessly dances to the song). Madonna is an expert performer and somebody who knows how to deliver a message. She was political, she was playful, she was sexy, she was introspective and -gasp!- she was humble. She recognized the Batukadeiras and the influence of people in Portugal before and while recording this last album.

Of course, not everybody was happy. There was a (straight, I think) guy behind us who was like 'oooh I didn't know she was going to be political'. Bitch, it's Madonna. EVERYTHING is political with her. And of course the gay glitterati was going to have an opinion: guy 1 on Red Line tell his friend "I was expecting more dancing, she's doing less and less dancing" guy 2 answers: "Well, she's not twenty anymore..." I rolled my eyes so hard I almost fell asleep in my seat. The whole idea of a theater tour escaped them. And she DID dance. Really, gays?

So yeah. Madonna. I hope she makes a special out of this tour and sells it. I'd love to watch it all again and enjoy it all over again. She was here to disturb the peace and she achieved that. Because I am sure the details that will come up next time I watch it will be even juicier and we all know that the devil, who's inside all of us, is in the details.

P.S. there's a James Baldwin quote at the beginning of the concert that sums up her reasoning for the theater tour and I am posting it here in its entirety:

“Art has to be a kind of confession. I don’t mean a true confession in the sense of that dreary magazine. The effort it seems to me, is: if you can examine and face your life, you can discover the terms with which you are connected to other lives, and they can discover them, too — the terms with which they are connected to other people. This has happened to every one of us, I’m sure. You read something which you thought only happened to you, and you discovered it happened 100 years ago to Dostoyevsky. This is a very great liberation for the suffering, struggling person, who always thinks that they are alone. This is why art is important. Art would not be important if life were not important, and life is important. Most of us, no matter what we say, are walking in the dark, whistling in the dark. Nobody knows what is going to happen to them from one moment to the next, or how one will bear it. This is irreducible. And it’s true for everybody. Now, it is true that the nature of society is to create, among its citizens, an illusion of safety; but it is also absolutely true that the safety is always necessarily an illusion. Artists are here to disturb the peace. They have to disturb the peace. Otherwise, chaos.”
James Baldwin