So Windy City Playhouse is staging The Boys in the Band and I just had to go see it. Many people are familiar with the 1970 movie (I watched some scenes is a Gender Studies class years ago) but I had never actually seen the whole play. Apparently Mart Crowley wrote the play in 1968 in a lull he had in between jobs (he thought he was done writing scripts, btw) and for awhile it was such a success that it basically revived his career. I know it's a seminal work and that there was a revival one or two years ago with A-List gay men taking on the roles Crowley created. There's also rumors of a Netflix movie, hopefully with the same cast who revived it for its 50th anniversary. 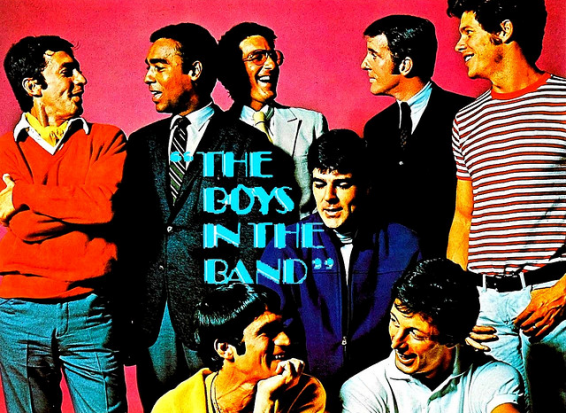 The thing is, apparently after the movie came out the Stonewall Riots took place and suddenly it was all about Pride and the portrayal of gay men's life Crowley had depicted suddenly did not make much sense. The Stonewall Riots gave gay men a new outlook and a new way to see themselves. The word that people wanted from then on to be associated with was Pride. The Boys in The Band (the play, and also the movie) is definitely a time capsule about what it meant to be a gay men in New York in the late sixties. Remember, at that time people could get arrested in any gay bar, homosexuality was in the DSM and there seemed nothing worse for a man than being considered a homosexual. Lives were destroyed and careers derailed at the least insinuation of gayness. And it is in this stew of self-loathing and unthinkable (for 2020) repression that the play takes place.

I decided to go watch the play after a workmate went to see it and he said I NEEDED to go. I trust his word about these things. He's been in academia for longer than many people I know and he's got a fantastic eye for theater. He also recently came out (a late bloomer) and has taken to all things LGBTQ with a keen eye. So after we talked I decided to make it a special outing and was ready to go to the city in no time to have a Theater weekend. Getting the tix was actually quite easy (went to their box office) and then it was just time to plan that day around the play: we did some shopping, then a Brazilian restaurant and some more shopping and then it was time to go to the Playhouse.

When you get there, they give you a little handout that is a RIOT. God I wish I had taken a picture of it but it went something like this:

Listen up, Mary. No recording of any kind. Leave your Polaroids and your tape recorders in your pocketbook . You don't have to sit in one place, you can move around. Just stick to the red benches. And if you sit in the sunken living room, honey, watch your feet and your handbags.
In short, do not behave in any way that you wouldn't if your mother were here. Also, call your mother.


It needed the instructions because the play was an 'immersive' experience: it takes place at a party, and we were all invited to it. They take you to the stage (that is also the whole theater) in a make-believe elevator and then you walk through what seems to be a hallway all the way to the 'apartment' where the action takes place:

The place is the epitome of late sixties groovy: all big prints and kitschy lamps and technicolor bursts. It was an experience. We sat down by the big windows and waited for the play to begin. The actors start circulating around before you know it and suddenly, there's a buzz at the door and the play and the party start.

I have to say I was totally into it. I laughed. I cringed. I cried a little. I laughed again. And it was not the Vodka and lemon juice that I had what made me do that (they pass drinks and finger foods for the audience when the party is in full swing, mind you) but the emotions the actors made so vivid. These boys take their craft very seriously. And of course, being basically six feet away from the action makes you gasp without even thinking. The script of course is full of things that are totally outdated: there's barely veiled racism (one of the characters is black and another Jewish) and there's stereotypes galore. But I have to tell you, it still applies. Sad but true.

It's almost like seeing avatars for each one of the stereotypical gay men we know come to life: the queen with no money and more than a little bit of internalized homophobia; the best friend with whom we may have tricked; the beautiful gay guy who refuses to conform and give up fucking whomever he wants even when in a relationship; the married man who falls for a guy and gets divorced; the token black friend; the flaming, funny queen; the mordant, witty friend who knows for sure he's not pretty but who gets to sit and watch a 'friend' tear everybody else to pieces; the closet case, and the pretty boy whose only currency is, well, beauty.

The more the play advances the more you think it's outdated and the more you realize it's not. We still tear each other down. We still put each other in tidy little boxes that we can move around in parties and in hookup apps. We still find relationships hard to manage even now that we have gay marriage. A gay marriage that we try to make fit in tidy little heteronormative boxes. It was a great experience, though. Don't get me wrong. It gave me food for thought and the chance to write this blog post. What's not to like?

And what did I do upon getting home? Well, I tried to watch the movie inspired by the play. I just had to watch it. I tried Apple. I tried Amazon. I tried Netflix. I tried Hulu. I tried YouTube. Nothing. Only snippets of the movie and the original trailer.


The Boys in the Band (1970) from Calgary Queer Arts Society on Vimeo.

Then I hit jackpot on Vimeo (who knew?) I have no idea how long it will be up online so I'd recommend you watch it (if you have not done that) while you can. It'll give you an idea of what I saw on stage and why it kind of hit me the way it did. So go ahead, grab your popcorn, put your feet up and take a trip to 1969. You'll see that what I'm telling you it's true: the more some things change the more some things stay the same.

Happy viewing. And if the play makes it to your local playhouse, go. It'll be an experience. Take my word for it.