I have never really seen Billy on The Streets complete. But I do think Billy Eichner is an 'everyman' when it comes to gay 'representation': not too 'out there', not too closeted, with just the right amount of crazy. He's been doing comedy for years and it's a familiar face. And now he's going to be in a Rom Com that just happens to be gay as hell. Fun, right? Just looking at the trailer I can see the stereotypes pile up, but you know what they say about stereotypes...
What I do think is that this movie seems to speak of a very specific gay experience: that of the white city gay male that 'passes' and that may have its appeal. Straight-passing guys do have their struggles, after all. It may give us a perspective on the hardships of an attractive gay male who seems to have trouble finding true love in the sea of apps and fuckery that is gay dating in 2022. I'm in.
And this movie, just like Fire Island, is bringing an all-queer (and inclusive!) cast to the forefront. What makes this one different is that it is backed by a big studio and has major players involved, both in front and behind of the camera. You know that if this movie is successful, they'll make more gay rom coms, right? Remember when Crazy Rich Asians brought all the money? It's also refreshing to see queer actors playing queer (and straight) characters. Maybe from now on more gay men in Hollywood will be more willing to play gay on screen? Hopefully?
Only time will tell.  Meanwhile, I'm getting my popcorn ready cause this one will make me go to a movie theater. Hey, if I'm gonna go to the movies, it better be for a good cause. Also, eye candy.
XOXO
@brosthemovie 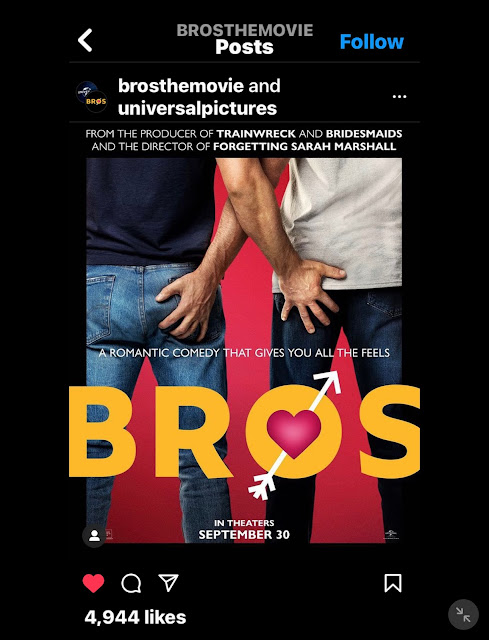